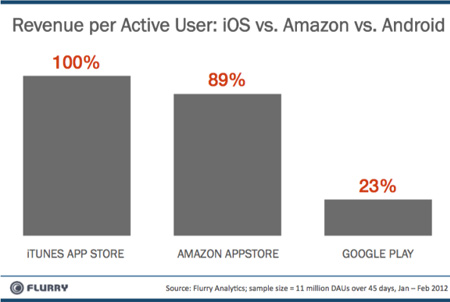 A recent report by Flurry highlights that the Amazon Appstore for Android generates more revenue than what Google Play does. The research which arrives at these results have been conducted for over a period of 45 days, starting off in mid-January to the end of February 2012.

For gathering the numbers, the research apparently examined a few top-ranked apps available across the iOS, Amazon and Android platforms. The average of these applications were then combined to approximately 11 million daily active users. The study further sets the revenue generated in the App Store to 100 percent and then compares it to relative amounts made by Google Play and the Amazon Appstore. The results brought to light estimate that the latter store’s revenue per active user is somewhere around 89%, while Google’s own application market stood at the remaining 23% of the Apple App Store revenue. Alternately, it can also be said that Android and Amazon gain $0.23 and $0.89, respectively, for every $1 that iTunes makes, when taking into account the same number of users for each platform.

“For some possible insight, let’s consider the DNA of each company. Apple runs the highest revenue-per-square foot generating retail store on the planet as well as the successful iTunes store. Amazon, who invented the one-click purchase, perfected online shopping with data, efficiency and customer service. Google’s strength is in scalable online search engine and advertising technology. Running a store, retail or digital, has not been Google’s traditional core competency,” states the report on the official Flurry blog.

The results obtained during this research fall in line with a similar study conducted by Flurry back in December of last year. It brought to light that for every $1 generated by iTunes App Store, Android is most likely to earn $0.24 per user. Amazon employs the forked version of Google Play to proffer an enhanced shopping experience by adding in features such as one-click purchase and many more more. This could be the reason why it has an upper hand over Android, when it comes to generating revenue on the Appstore.

Reports by Flurry indicate that more and more developers may be seen turning towards the Amazon Appstore instead of Google Play as the preferred mobile app ecosystem for the Android platform.