Amazon Appstore for Android turns one, celebrates with a week of deals 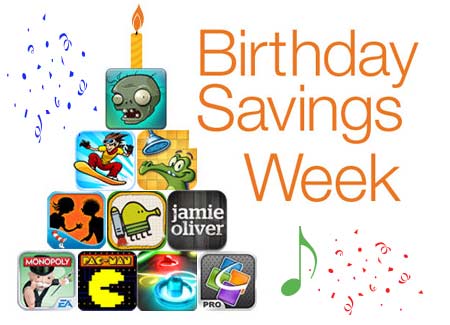 Bring out the cake and candles as the Amazon Appstore for Android celebrates its first birthday. And to commemorate this milestone, entertainment enthusiasts can take complete advantage of various eye-catching deals that are set to roll out all through the week. According to the company, the festivities extend to many well-known games and apps already available on the virtual platform.

Some of the titles featured in the array include Fruit Ninja, Splashtop Remote Desktop, TuneIn Radio Pro, Pac-Man, Monopoly and Dr. Seuss’s The Shape of Me and Other Stuff. Furthermore, owners of the Kindle Fire and other Android based devices can also indulge in Wolfram Alpha, Tetris, The Lost City, Jamie Oliver’s 20 Minute Meals and AccuWeather Platinum.

The party kicked off yesterday, as one of the acme paid apps dubbed Plants vs. Zombies went up for grabs tagged at just $0.99, which is a 67% off from its original $2.99 price. Today, Amazon continued to tread on similar grounds by offering two more apps at discounted prices. From sporting individual tags of $2.99, Dr. Seuss’s The Shape of Me and Other Stuff and Wolfram can now be purchased for $1.49 and $0.99, respectively.

“Customers have used the Amazon Appstore to test drive and buy millions of apps and games for their Kindle Fire and other Android devices in the first year alone,” commented Aaron Rubenson, director of Amazon Appstore for Android. “To thank customers for shopping with us, we worked closely with our developers to offer special discounts on some of the most popular apps all week long.” 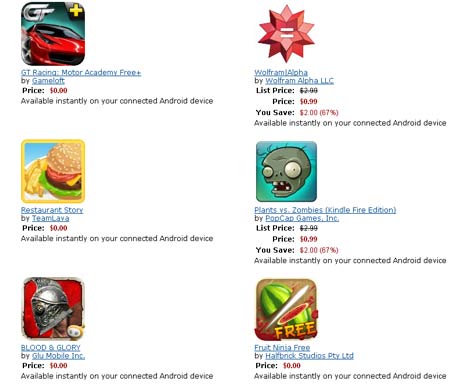 Day three will see a trio of software options porting their way to the birthday goodie bag, each tagged with a pocket-friendly cost. In a similar fashion, other apps and games in the aforesaid array are expected to be given the same treatment. They will be unveiled across the terrain with similar deals attached to them. Furthermore, the company has also revealed that eight lucky winners stand a chance to be the proud owners of a Kindle Fire. This offer is open to those who take part in the Amazon Appstore for Android Birthday Giveaway sweepstakes which will end on March 31.

The Amazon Appstore for Android week of deals has already begun in full swing and is slated to conclude on March 22, 2012.