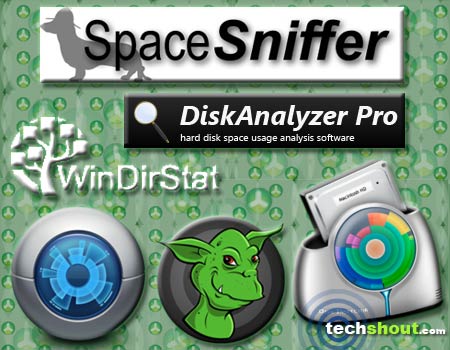 With a good TreeSize alternative residing in your PC, you’ll be able to put all your disk space woes to rest. One great solution is all you need to easily manage your various drives without even breaking a sweat. And once that gem is in place, you can also determine the overall volume of various folders that are sitting in your drives. What’s more, you won’t even have to rack your brains with complex figures and digits as the ideal program will have the ability to layout all the information neatly across your screen in the form of easy-to-read charts and tables. Well, we’ve lined up the acme lot of the options out there, so read through our list and pick out the one you think suits you best. 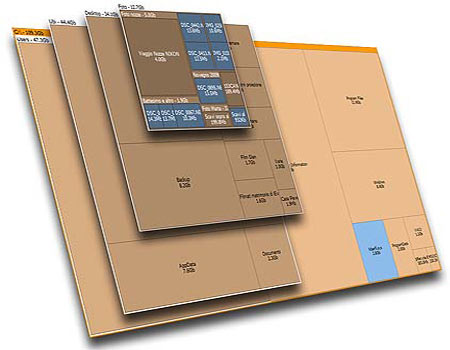 The disc analyzer from the barn of Uderzo Software gives you a better understand of how the files are laid out across your PC. This portable freeware tool visually displays the respective positions of your data so that you’re aware of where the large folders are located and how the little ones are distributed across your system. All you have to do is begin a scanning process and you’ll be given a visual layout of the entire situation.

And if you want to dig even deeper into the files contents, you’ll need to simply single or double click on the desired files. You can further filter your searches by looking at only certain file types. You can also tag specific ones to keep track of them by employing a set of 4 colors. 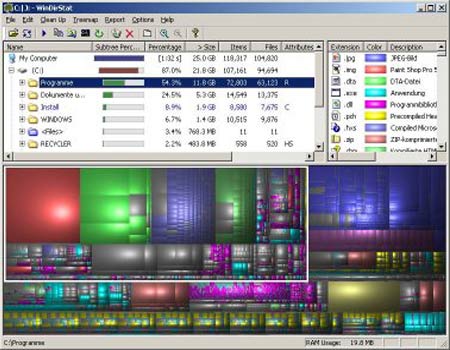 This entrant in our programs like TreeSize roster is looked upon as an open-source disk usage statistics viewer that complies with different Windows versions. Wondering how the program works? Well, it first attempts to scan the complete directory and then present the data bits recovered in a trio of methods. While the first option namely, the directory list is sorted by file size, the second option shows the entire content in a simple manner with each file size representative drenched in a colored rectangle.

The subcategories are further broken up into smaller rectangles. The third is known as extension list and displays statistics based on the file types. The amalgamation also includes cushion shading for clearly displaying the directory structure. 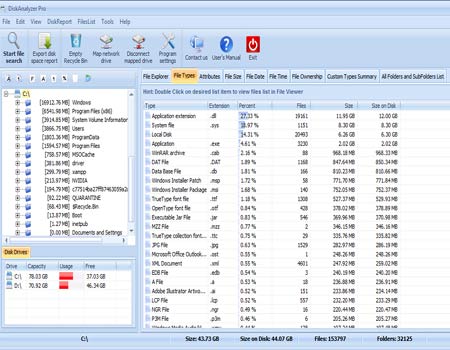 With the help of this Windows-only disk space usage analysis and management software, you’ll be able to zero in on the largest files currently dwelling in your drive. You’ll further be bombarded with detailed disk space consumption reports that are spread across various groups such as file date, file ownership, and file types. You can also salvage some precious gigabyte space by getting rid of useless files like the internet, junk, and temporary files.

You’ll even be able to adhere to your own search terms and even find duplicate data bits, videos, pictures, audio files, and compressed files. A few of the program’s other attributes include a new command-line scanner as well as a built-in file explorer and viewer. And although it’s free to download for personal use, there’s even a Pro Edition available that has a starting price of $39. 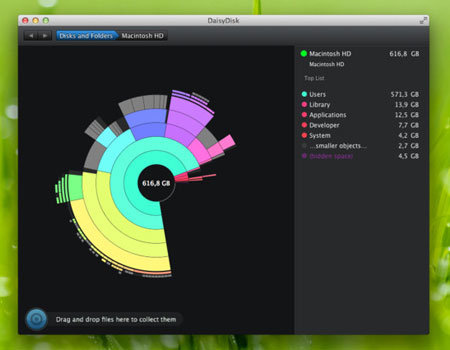 After revealing a handful of Windows options in our apps similar to TreeSize array, we now shed light on a few solutions that are created for the Mac OS X. The shareware software which came into existence in 2008 scans your entire system and displays its findings across the screen in the form of sunburst interactive maps.

And by throwing a glance at this layout, you’ll be able to easily spot exactly what each of your files in your disks contains and deal with them accordingly. Tagged at just under $10, Mac OS X users can acquire this one either from the official website or via the Mac App Store. 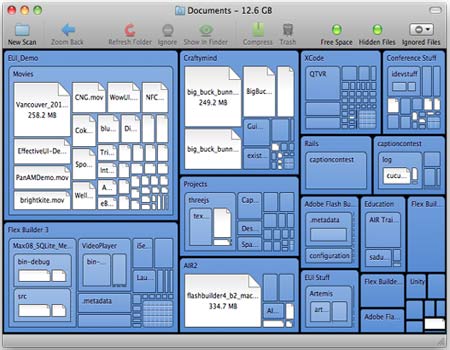 No, this isn’t the name of a blockbuster sci-fi movie by George Lucas but a disk space analysis tool that’s also fashioned for the Mac OS X. This interesting inclusion forayed onto the scene a couple of years ago and has since helped loads of Mac users zero in on large and unnecessary folders so that these bits can be eliminated from the system. Once it conducts a simple scan, the program slaps forth a readable view of your entire file system.

You can further adjust your overall view and even decide whether you want to compress or trash specific virtual ‘gremlins.’ It even automatically refreshes the folders for an updated appearance. This utility can be picked up from the Mac App Store by shelling out just under $4. You could also try a free demo of the same before pulling out your wallet. 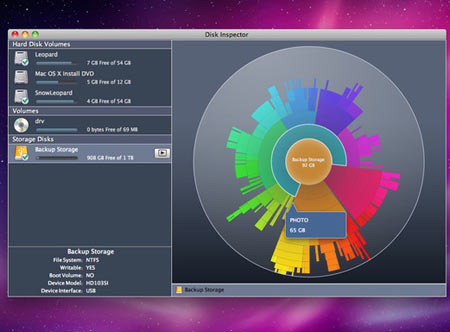 This contender in our programs like TreeSize round-up lets you efficiently manage all your large files no matter where they’re stored on the disk. Developed by Nektony, the handy software performs high-speed HDD scans of the entire PC and represents the data in the form of an easy-to-read sunburst diagram.

Some of the places this useful utility stretch out to include CD and DVD disks, hard disks, local volumes, external hard disks, USB flash drives and mounted DMGs. Sporting a $2.99 price tag, the interesting program is available via the Mac App Store.

The software in question here is noted to be a disk management tool that’s plucked right out from the house of JAM software. Now while this particular name catered to only Windows enthusiasts, our comprehensive TreeSize alternative collection comprises of treats that can be employed by Windows users as well as Mac OS X fans. So now irrespective of the system you rely on, you’ll be able to have a clear view of your complete disk space. Do let us know which one you opted for.