CyberDuck alternatives more or less have all the features that the said program boasts of and switching to one of the software we have mentioned below, doesn’t sound like a bad idea. As you may already know, the software in question is an FTP and SFTP client and even lets you connect to WebDAV, Amazon S3, Google Drive and more. The program meant for computers running Windows and Mac OS X systems has the ability to transfer a slew of content. And considering that the tool can be integrated with any external editor, it makes it easy for you to quickly make modifications to the content you are uploading. Scroll down to know more about the tools listed in no particular order.

Transmit 4 is a great substitute for the program in question for owners of Mac computers as it acts as an FTP, SFTP, Amazon S3, and WebDAV client. Those of you who maintain websites, create backup folders frequently or upload pictures should definitely give this software the once-over. Featuring an intuitive interface, the tool that allows file synchronizations, even lets you compare them based on their sizes. 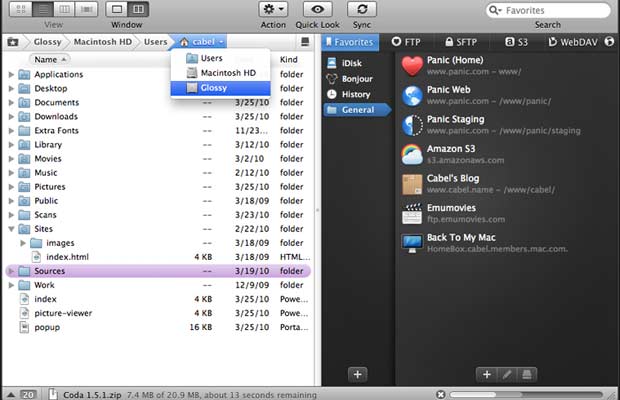 And thanks to the built-in Twin Turbo engine, it can accelerate the process to a great extent and save up on time. And if that’s not enough, the application even supports multi-connection transfers.

Filezilla is one of the efficient programs like CyberDuck and offers both a server as well as a client. The open-source solution boasts of an intuitive graphical user interface and is compatible with multiple platforms including Windows, Mac OS X, Linux, and BSD. The FTP, FTPS and SFTP client supports IPv6 and lets you transfer large files as well. 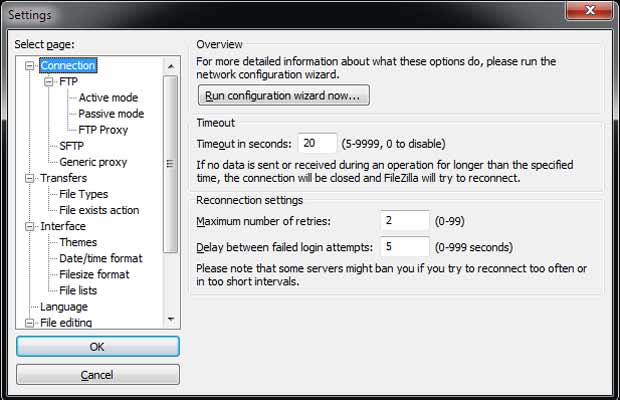 Apart from a tabbed user interface, you can expect a powerful site manager and even a transfer queue. Some of its many other features include drag and drop function, remote file search and editing, directory comparison, bookmarks, configurable transfer speed limits and many more. We had also listed tools similar to Filezilla and you can hit this link to peruse them.

WinSCP extends support to protocols like SFTP, SCP, SSH-1, SSH-2 and of course, FTP. It claims to drag along a graphical user interface and is available in multiple languages. The program works on systems running the Windows OS and lets you drag and drop files and carry out most of the common operations. 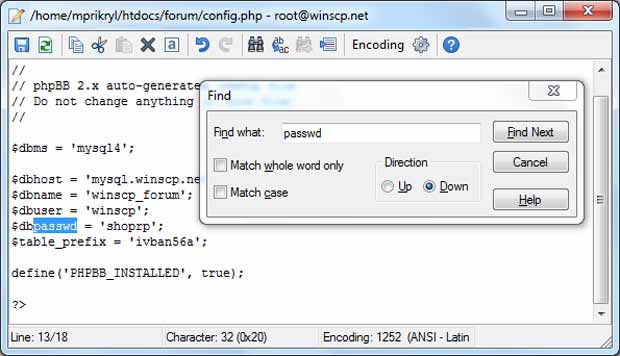 Complete with a text editor, the tool that boasts of directory synchronization in semi or fully automatic ways, gives you the option of storing site information too. It can be used for basic scripting functions and its portable version lets you continue your work from removable storage solutions as well.

The latest version of CuteFTP that has found a place on this roster of software similar to CyberDuck has not only been blessed with performance improvements, but also some new key features. Complete with support for Unicode character set and WebDAV, the program now tags along TappIn, a secure mobile file sharing application for allowing you to share files from computers to various gadgets such as iPad, iPhone, Android devices, Kindle, laptops, desktops, Macs and more. 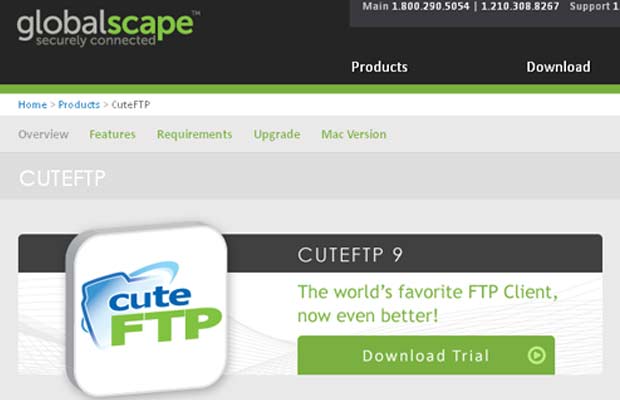 This FTP, FTPS, and SFTP client can carry out fully automated transfers and lets you backup as well as synchronize your sites. It permits you to modify documents remotely with the built-in editor, monitor local folders, drag and drop files for easy management and even manage multiple websites at the same time.

If you are a Mac user looking for a reliable and feature-rich file transfer client, then you have stumbled upon the right option. Fetch works with FTP, FTPS, and SFTP protocols and drags along shortcuts that facilitate easy uploading. Its mirror command lets you synchronize folders and the drag and drop function makes it extremely easy to move files between servers and systems. 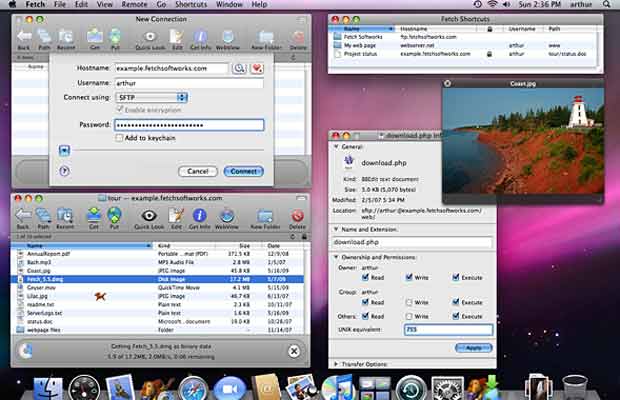 You can preview files on servers and edit files without worrying about uploading them again. Also, in case uploads and downloads are stalled or they fail, you won’t have to prompt the tool to finish the task again, it does so automatically.

ForkLift 3 is another option in the compilation of programs like CyberDuck that is meant for Mac OS X-based computer systems. This FTP, SFTP, WebDAV, S3, iDisk, SMB, AFP and NIS client lets you split or combine multiple files and facilitates sync browsing too. You can compare folders from various locations and rename a horde of files without any hassles. 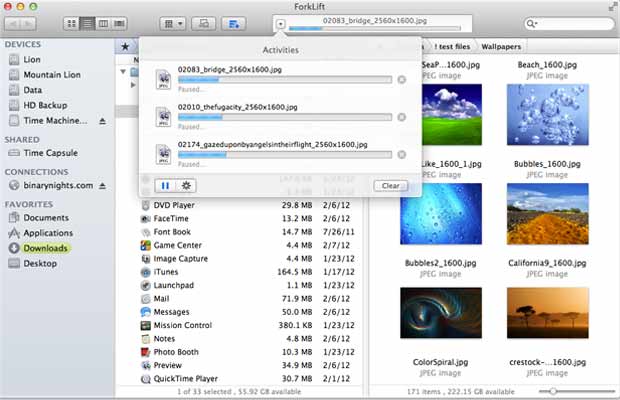 It permits you to delete applications from the program itself and integrate an editor into the tool for modifying files remotely and your changes will be uploaded automatically. The program works in tandem with archive folders as well.

And the final contender on this catalog is not exactly a software, but an add-on for Mozilla Firefox browsers that has been loaded with all the necessary features required for carrying out the task at hand. The FTP and SFTP client is compliant with all types of systems, provided they have internet access. 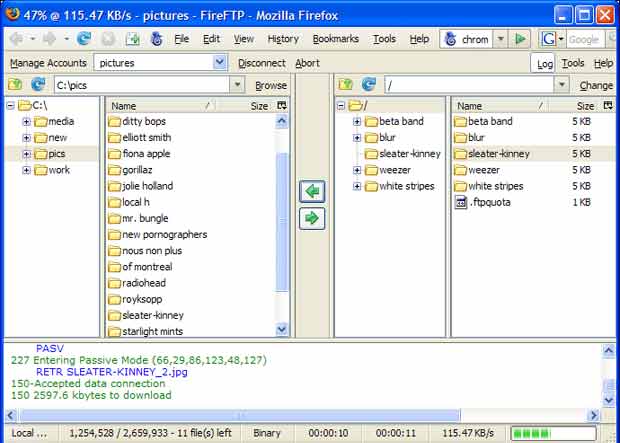 In addition to transferring files, you can look out for features like directory comparison and synchronization, search and filtering, remote editing, file hashing and more. Also, like most of the other tools mentioned above, it too lets you drag and drop content.

These we think are the perfect CyberDuck alternatives and will completely eliminate the need to look for other similar programs as they have been blessed with features that you may seek. Don’t forget to drop in your responses and suggestions in the comment box down there.