We already know quite a lot about the Xiaomi Mi 4i smartphone, but what’s we’re still clueless about is its design. So far, it has been safe to assume that the same form factor used for the original will also be implemented here, but a newly leaked image suggests that we could be seeing a few modifications.

As you can see below, only a portion of the Xiaomi Mi 4i smartphone has been made captured in the frame. And like the original, the upcoming device will also have super slim bezels surrounding the display. You’ll also notice that the front camera is placed just besides the earpiece above the screen and not to the far right. 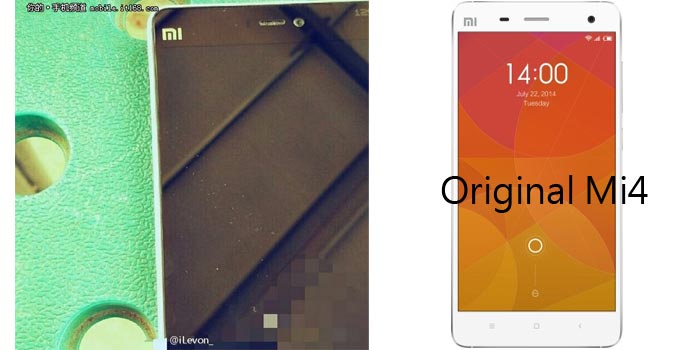 That’s all we’ve managed to learn from the leaked image which comes via Chinese website mobile.it168. The front sensor will not be an 8MP snapper, but downgraded to 5MP. The rear imager, on the other hand, will continue to offer a 13MP rating and we doubt the sensor will be same as the one on the Mi 4.

Also read: Even Sony jumps aboard LTE bandwagon in India through Xperia E4g

The original phone has a metal design and there’s a good chance that the same form factor will be implemented on this Xiaomi device. Additionally, the company could opt for a polycarbonate build to reduce the overall production cost, considering that the main goal is to offer the handset with a very affordable price tag.

Here’s all we know about the Xiaomi Mi 4i’s specs:

We’re less than a week away from seeing the Xiaomi Mi 4i smartphone go official and more information on the handset should surface in the coming days.