March 1 is the day when HTC will unveil its new flagship phone and it looks like there will be more than one release in the series. We’re now hearing of a One M9 Plus smartphone which will supposedly carry high-end hardware and fall in the phablet category.

GSMArena is reporting citing Nowhereelse.fr that images of the HTC One M9 Plus have been leaked online. The pictures don’t really give a good look at the smartphone, but the interface is visible with the AnTuTu Benchmark 5.0 application running. This has given us quite a bit of information on the hardware used for the phablet. 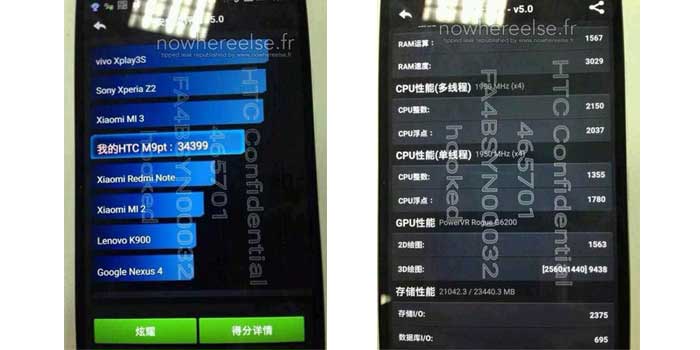 The actual size of the smartphone is still a mystery and we still don’t know what type of display or resolution it will offer. And while it appears as that the company will go with a 1080p panel as the HTC handset won’t be as powerful as new flagships, the low benchmark score could be the cause of a 2K panel.

What we know is that the smartphone will be powered by a 64-bit quad core MediaTek processor with 1.95GHz clock speed and have PowerVR G6200 graphics. The SOC isn’t as powerful as the new octa core Snapdragon 810 chip, but it should be at par with the S801 which is found on 2014 flagships.

The upcoming One M9 flagship is said to be in development under the Hima codename and will go official on March 1. The phone is said to feature a 10-inch 1080p display with the Snapdragon 810 octa core processor. There will be a 13MP or UltraPixel front camera and a 20.7MP rear snapper.

The report notes that the HTC One M9 Plus will be headed to China first which brings up the possibility of it being exclusive to Asian markets.