As suspected, the upcoming Microsoft Lumia smartphone will be called the Lumia 535 and the device has been leaked online with images and specs in tow. The phone is obviously an entry-level one and it looks like it’ll be quite a good upgrade over the Lumia 530 which is currently the cheapest option in the new lineup.

WMPoweruser notes that the Microsoft Lumia 535 has been leaked in China on SNS Weibo. The images you see below aren’t of the actual handset, but a dummy unit which you’d normally find on-display at retail locations. The model indicates that the phone will be a dual SIM one and we doubt that it’ll support LTE networks. 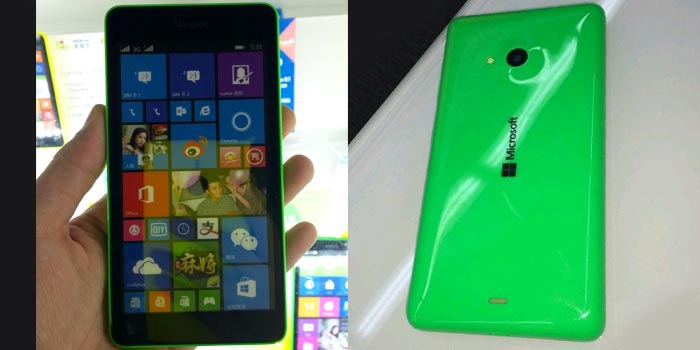 However, this may be due to the dummy unit being of the version headed to China where multi-SIM phones are in demand. For other markets like the US and UK, we might see a single SIM version be offered, but there’s still a high possibility that LTE won’t be onboard.

And that’s mainly because the phone is an entry-level release and powered by the Snapdragon 200 chipset. The processor is a 1.2GHz quad core one based on the Cortex A7. The phone has a 5-inch display and the resolution used here is qHD. Additionally, there’s a VGA camera on the front which is a first for an entry-level Lumia handset, and the standard 5MP rear snapper with LED flash.

Here’s a roundup of the alleged Microsoft Lumia 535 specs:

The Microsoft Lumia 535 is scheduled to be unveiled tomorrow and it will reportedly come in options of blue, green, white, gray, orange, black and white.