After launching the OneTouch Flash in Thailand to take on the Redmi Note from Xiaomi, Alcatel has brought the phablet over to India and its timing couldn’t get any better. The latter device is expected to go on sale in the country as well, in the coming weeks, and both phones offer similar specs and are priced at Rs 9999.

Alcatel certainly wants to compete with Xiaomi in India where its devices are selling like hot cakes. And it’s touting the Flash handset as a selfie release mainly because it carries a 5MP front snapper. Like the Redmi Note, this device comes with some pretty great features under the hood. 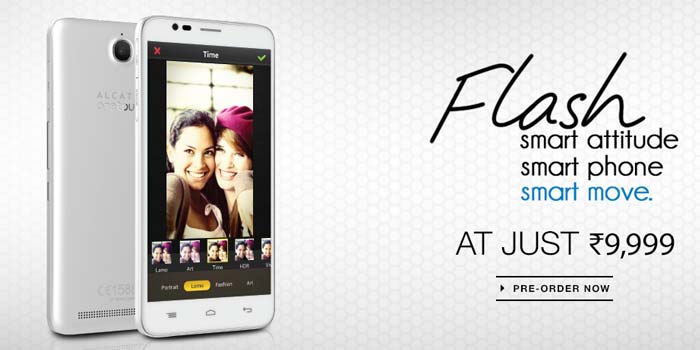 It too, is powered by the same octa core processor, but with a clock speed of 1.4GHz instead of 1.7GHz which is on the competitor’s phone. Where the Alcatel One Touch Flash has the advantage is its OS which is Android 4.4 KitKat out of the box, while the Redmi Note has 4.2 Jelly Bean for now. Also, the new release comes with a higher resolution 5.5-inch 1080p display.

Its rear camera is rated at 13MP and supports full HD recording. For memory, there’s just 1GB of RAM which is a bit disappointing and storage is listed at 8GB with 32GB expandable. The phone is also dual SIM enabled with HSPA+ support and Alcatel has thrown in a 3200mAh battery which can deliver up to 19 hours of 2G talk time.

The Alcatel One Touch Flash is available for pre-order exclusively through Flipkart in India. It’s slated for release by the end of November.