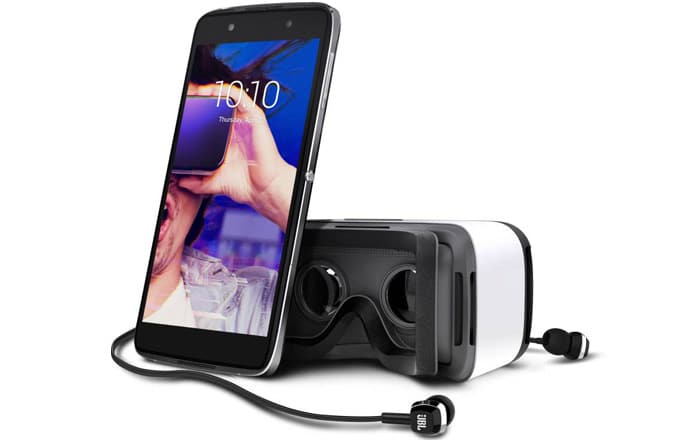 The Alcaltel Idol 4 has made its India debut and is now available exclusively via Flipkart priced at Rs 16999. The phone had first arrived on the scene back in February this year at a pre-MWC 2016 event alongside the Idol 4S and Plus 10.

The Idol 4 hopes to set itself apart from its Indian competitors with a dash of virtual reality. Alcatel’s bundling a VR headset with the phone, allowing users to explore 2D and 3D videos and games, in addition to VR-specific apps through a pre-installed VR Launcher.

Alcatel’s including a pair of JBL earphones with the device as well. It’s even integrated Waves’ MaxxAudio technology to enhance the phone’s dual speakers. The brand’s also touting the offering’s adaptive display which adjusts the UI according to a user’s vision. It claims that the left and right audio channels switch automatically if the device is flipped around.

The Idol 4 further comes with an all-purpose boom key on its side to control a range of functions across apps like camera, music, videos, and gallery. Individuals can press and hold it to trigger the shooter’s burst mode, while holding it down while recording footage broadcasts the stream live.

Here’s a neat summary of the main specifications of the Alcaltel Idol 4:

The Alcaltel Idol 4 is being sold in grey, silver and gold color options via Flipkart.