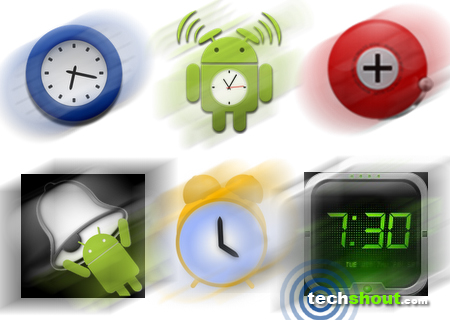 The best alarm clock apps for Android list is finally out, complete with inclusions that glorify the ‘Snooze’ button. Captain Z and his army of snores should have a hard time defending dream zone from the likes of ‘Mr. Snoozey’ and his alarm force. Well, we have to face reality and crawl out of bed sometime or the other and what better way to do so than with the extensive line-up of apps that claim to be effective enough to actually get you out of dreamland and into reality? 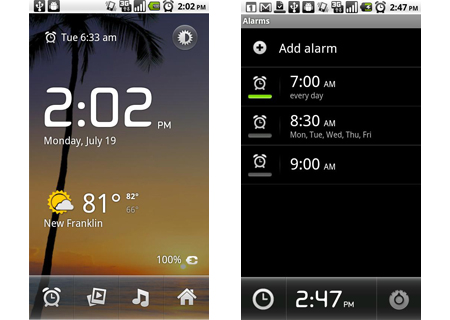 This fully-featured and stable Android alarm clock is packed with various innovative attributes such as unlimited alarms, auto snooze and auto dismiss alarm clock as well as alarm clock while muted. The app further boasts of other alarm clock forms like nap, music and playlist modes. The alarm timepiece has the ability to speak out the weather and time as well as allow users to ‘shake off’ their remainder sleep by actually shaking their handset. They can also alter the snooze time after hitting the button, to silence the set. If the volume is what’s getting you worried, well the alarm clock levels are independent from those of the actual Android phone. So you can expect it to ring with the customized tone. 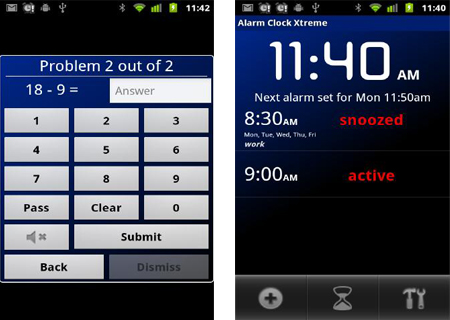 The Alarm Clock Xtreme app touts to prevent excessive snoozing while offering reminders that are set to spring off throughout the owner’s busy day. This latest entrant into our alarm clock apps for Android list makes waking up a little more bearable with the advanced alarm clock features. One among them is the gentle wake up with steady increasing volume.

Another apt inclusion is the huge snooze button for those who actually fail to spot the correct tiny ones featured in other apps. A great option, which is our personal favorite, is the math problem addition which breathes life into the phrase ‘You snooze, you lose’. You must correctly crack math sums which prevent you from hitting the alarm-off switch and slumping back onto the bed. 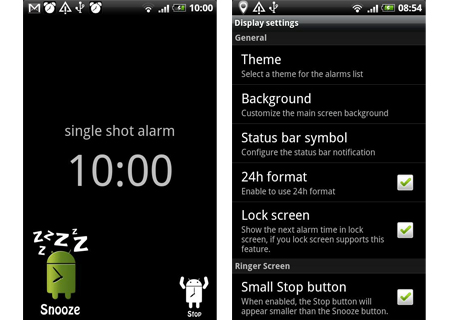 Next up on our list of alarm clock apps for Android is the AlarmDroid app which enables snoozers to awake just the way they would prefer it. No more loud rings or unpredictable snooze buttons. This rich application offers a flip ‘n’ snooze feature which enables owners to simply spin over their handset for turning the snooze mode back on. Besides this, the software also announces the time and local weather condition to notify you whether to slip into something warm or not. If you are fed up of listening to your own predictable tunes, then why not wake up grooving to the songs internet radio stations have to offer? 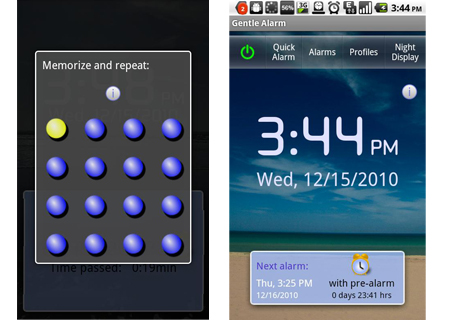 Touted to be the most feature-rich alarm clock on the market, the Gentle Alarm app is set to make you rise and shine without greeting the glorious morning in a foul mood. A notable factor is the optional pre-alarm that attempts to wake up a light sleeper. You can customize how many minutes prior to the actual alarm time you want the pre-alarm to go off.

If you are a heavy sleeper, then chances are that you won’t really hear the ring and rise at the actual alarm time however, a light sleeper would awaken immediately and be fresh when the actually loud chime goes off. Besides catering to English-speaking Android device users, the app can also be procured in other languages such as Italian, Portuguese, Russian, Dutch and many others to calmly wake up tech enthusiasts all across the globe. 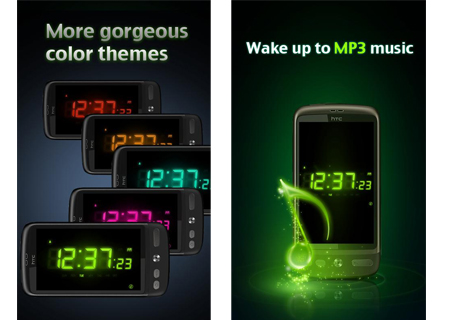 Alarm Clock Pro has the ability to transform the otherwise mundane Android device into a beautiful digital clock complete with an attractive alarm clock, themes and integrated flashlight. All this is laid out on the big LCD display for a better view, even in the wee hours of the morning and with just one eye open. The clock flashes in various hues such as cyan, orange, yellow, blue, red, and pink among others as well as vertical and horizontal modes. The alarm can be set to sway to your selected song or playlist besides the 11 integrated alarm sounds like school bell, high tone, old clock and cuckoo. No need to awaken with a sudden jolt as it also offers sound/music fade in. If you find your stomach growling for a midnight snack, the app allows you to simply shake the handset for acquiring the in-built flashlight with which you can easily locate the refrigerator. 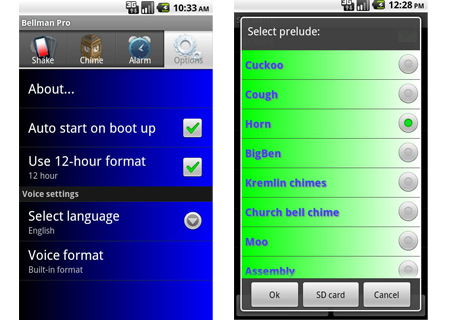 Speaking of shaking, the Bellman Pro app which also enters our roster of alarm clock apps for Android boasts of a similar feature in order to enable the phone to speak the time out aloud. The voice report can be wobbled at any given time as well as be programmed to cry out like a herald every quarterly, half-hourly and hourly. Furthermore, the alarm clock is armed with a plethora of features that include countdown starting, unlimited alarms, speaking time voice, music ringtone, and various repeat cycles with integrated seconds, minutes, hours and even days. The tunes can be taken from any type of music file such as mp3, wav and others packed up into the SD card. Besides supporting languages like English, German, French, Spanish, Chinese and Russian, the app is also customizable in any other language or voice style.

Not a morning person? Well, the aforementioned best alarm clock apps for Android lineup is assigned to get you out of la la land and start your day on a fresh note. Whether it’s solving math problems, hitting a gigantic snooze button or waking up to your favorite band, all these tried and tested means are sure to get you up and going, to face another fruitful day minus the tardiness. Do notify us about which of the above treats got you the nicknames ‘Punctual Pete’ or ‘Late Larry’.

Nokia Android phone 2016: Everything we know so far