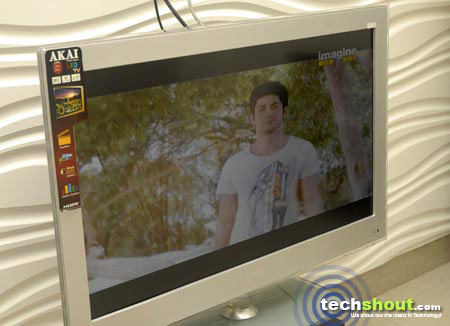 Can we call an iPad without the high price tag an Apple product? Could we can call our Twitter activities ‘tweeting’ if it wasn’t for the little blue bird? We probably could and won’t be fined for it. Can we call a living room without a TV a living room? It’s difficult to say. The picture of friends hanging out in the living room and cheering on their soccer teams or of families enjoying a quiet weekend in front of the TV is tattooed into our brains so that walking into a living room without a TV would make us say ‘Where are we?’ As TV manufacturers get more and more generous on screen estate, tech world has also been seeing TVs emerge with significantly sleeker form factors each year. We decided to put the Akai HD LED32D20 TV through its paces recently and here’s what our review reads like.

The Akai TV and remote control arrived in a cardboard carton and well cushioned in a lot of thermocol. Its Italian brushed steel finish and glass trimmings from bezel to base have all the potential of a design scheme that could let the chassis blend well with your living room if the walls were painted in a comparable shade. The side view is reckoned at around an inch slim, though that section of the panel which hosts the connectivity ports measures as thick as 3”. Going by the profile, we’re probably allowed to assume that it packs a whole LED array behind the screen as opposed to being edge-lit. When the company talks about the 81cm diagonal specification, they’re referring to the 79cm front that includes the bezel, while the screen size is actually 69cm across. All the edges are framed by a fine transparent border so that the device gives the impression of having a spatial footprint which is a wee bit smaller than it actually is. Barely visible below the power indicator are markers in white on the glass border. These are for tweaking volume levels, changing channels, checking out the source and turning the TV on or off. 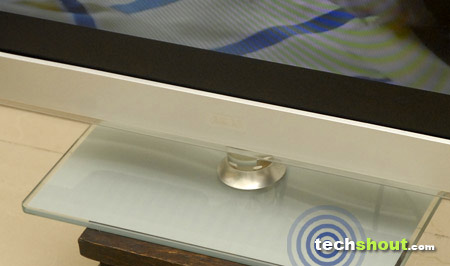 We won’t crack up if you admit to having spent a lot of time first pressing down on the white markings on the bezel’s lower right edge and then poking at the areas directly above them, pushing them to execute what they’re apparently supposed to do. Then we start thinking like the folks Akai has signed up on their designing team and feel the portion directly behind these markers. These are no tactile controls, but actual buttons that execute the corresponding functions which sit directly behind the said indicators. Overall, the whole appearance seems to be crafted in such a way that it does not create an undue amount of excitement in those who love flat-screens. Blame it on the arrangement or on anything else, the host of sockets on the back panel delivers the impression of being a rather messy affair. The remote supplied with this package does not match the LED32D20 TV in looks due in its plastic black exterior that’s fitted with a few colorful buttons apart from the regular ones you’d expect to find on such a peripheral. 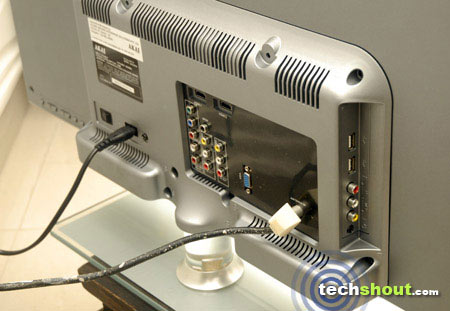 We switch on the TV and wait for the screen to come to life. One second, two seconds, three seconds, four seconds, five seconds, six seconds – that’s roughly the amount of time it takes to start up. At a contrast ratio of 1,00,000:1 and a response rate of 5ms, the picture quality is not bad. Of course, these are not the only determinants of how good your TV is. A slight lightening of the entire screen is all we can detect upon moving up or down, to the left or to the right of the screen. Which means Akai has made a really good TV or the picture standard isn’t very spectacular to start with and therefore the barely noticeable change in quality. Though the volume levels can’t really hurt your eardrums, it’s definitely above average. The customization options in these terms run along movie, stereo, music, news and personal. A lot of people seem to be content to work with surround on or off when it comes to sound, but fiddling between the different alternatives makes a load of difference and it’s not too much trouble for anything more than your fingers.

As for the time used up to switch between channels, the kindest would be to say it doesn’t allow enough time to take a quick nap while you wait to move onto the next. It’s 2 seconds before you can get to the next channel and rough calculations put it at an hour of sleep lost for every 31 channels surfed. Someone tell us why a TV in this day and age would be a sluggard when it comes to flipping channels. Even a thoroughly well equipped home theater system would probably find it hard to get takers if the TV attached to it won’t respond to the remote fast enough. We smell an almost sinister threat to the existence of the couch potato plopped down in front of it here. The Akai HD LED32D20 TV doesn’t give us much to wax eloquent about. On the connectivity front, you can hook it up to a PC and it’s dotted with VGA, SPDIF, antenna in and headphone sockets. 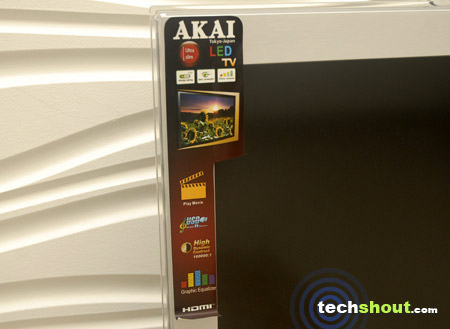 The Akai HD LED32D20 certainly does not starve in terms of connectivity. The back panel of the review unit we received was also plastered with USB ports and HDMI terminals, both coming in pairs. For attaching everything from camcorders to DVD players to consoles to the TV, we a have a couple of AV in options, each one comprising video in and audio L/R sockets. The list of outlets doesn’t end there – we also spy out AV out sockets, VGA/Component audio in and YPbPr component in sockets. Akai hasn’t thrown in any attribute or function they can mark out as their own and the way we use the remote or alter any settings feels comfortably familiar.

This Akai TV has an aesthetically designed front face. The silver and glass combination is quite pleasant to look at and the glass edges are the best touch.

It’s easy to use and does not make you feel like you’re navigating unfamiliar territories while tweaking color, sound or anything else deemed adjustable.

Its takes 2 seconds to flip from one channel to another. This sort of lag is extremely insensitive to compulsive channel surfers’ needs. It makes us feel like some unintended cross-connection on the remote activates the freeze mode for a second before letting us move to the next channel.

The TV is a one of those gadgets without a personality. If price tags are to be taken into account, the Rs 39,990 label stuck to it does not flit anywhere around the description ‘eye-popping’. There are occasions when fluff like oodles of adjustable features which are not truly necessary can convince potential buyers and this is one of them. We’re giving the Akai HD LED32D20 TV a 7.7 out of 10 rating for being just so-so. You’ll find it hard to lay a finger on what the ESP is and that’s a bit of a problem here.