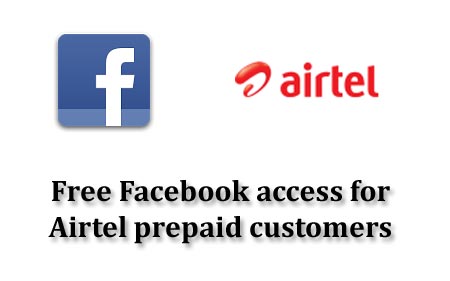 Airtel prepaid users are being offered free Facebook access for a limited time. Customers have from now until February 15, 2013 to access the social network for no charge via the dedicated mobile application. This means that logging on through a browser will be charged. In addition, users will have a 500MB limit.

All Airtel prepaid customers will be able to take advantage of this free Facebook access and will be able to update their status and upload images in the process of connecting with friends and family on the SNS. Accessing any external links will be charged as per the rates that prevail, as will usage beyond the free limit.

And this shouldn’t come as a shock, with Facebook in the news just recently for its new Graph Search. With it, the multinational aims to recapture a bit of lost ground over others like Google. What it does is basically allow users to search for things in a more natural way to which they might not otherwise have access.

It lets users search for things that have been shared with them, but which have gotten buried under the rest of the notifications and content posted and shared since. The social networking web site was in the news over a good period towards the end of last year, and not in a very good way. It changed a little bit of language in its privacy documents, a move that irked members of the site to some degree.

And in fact, the social giant just began rolling out free calling for iPhone customers in the US with the service having already been tested out for Canadian iPhone users. This feature is embedded within the Messenger app and works with Wi-Fi as well as data plans. We can go on and on but enough of the saga that has passed.

There’s not much more to say really about the free Facebook access afforded by Airtel to its prepaid customers. Just a reminder though, there is a limit to how much can be downloaded in the process. Up to 500MB of data consumption is allowed, and the offer lasts only until a month from now, which is February 15, 2013. A word of caution, going on a social networking spree might leave customers in a tizzy.