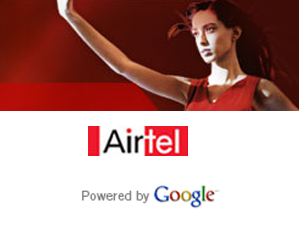 Customers at airtellive.com will get free access to a number of Google products including Google Apps messaging and collaboration suite which comprises Gmail, Google Docs and Google Calendar. It will also include the Start Page feature which allows users to create a customizable home page.

Besides Google, Airtel has partnered with other Indian companies like shaadi.com, naukri.com and 24x7guru. With this partnership, Airtel Live will also offer exclusive deals and discounts to customers.

Atul Bindal, President, Airtel Telemedia services commented on the launch saying, “Airtellive.com is a milestone in Airtel’s broadband strategy and it builds upon the current broadband ecosystem infrastructure to establish an Internet destination for web applications.”

“It underlines our commitment towards simplifying and adding value to our broadband customers and driving the adoption of broadband in the country,” he added.

Users will definitely enjoy the Airtel Live experience as the collaboration includes two major powerhouses who will offer a good customer experience with their expertise and innovation.