Of all the major internet service providers in India, Airtel was turning out to be a favorite among the internet users in India. Apparently, not only do they offer good speeds compared to other ISPs in India, they also have a decent customer care service. However, from the last few days, Airtel Broadband has been at the receiving end of the customers’ ire in India. 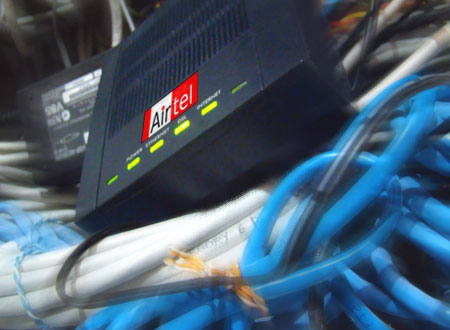 The reason? Well, apparently users of Airtel broadband in India have suddenly found out that Airtel has implemented download caps for the unlimited plans in some cities in southern India. Alternatively, there are unconfirmed reports that the ISP is even downgrading the net connection for users who surpass a certain download limit.

Members of www.thinkdigit.com forums and blogs are furiously discussing the issue and some of them have claimed that Airtel has either implemented download caps or downgraded net connections. It also seems that Airtel Broadband has also pulled and / or modified some plans from one or two of its circles.

One reason that is cited by Airtel is the “Fair Usage Policy”, which lets them caps on the downloads. A statement that reads, “Speed subject to Airtel Fair Usage policy,” has been added to their unlimited tariff plans.

One of the users pointed on the Broadbandforum.in, if you go to a buffet lunch, it is expected that you can eat as much as you want. In a parallel way, if it is an unlimited plan, an internet user expects to use as much as he or she wants.

Here is an excerpt from the letter a member from Broadbandforum.in had written to TRAI regarding this whole issue:

As per information/emails received by customers from Airtel, the limit on unlimited plans are as follows:

To clarify, we got in touch with Airtel Broadband, who confirmed this. According to a spokesperson from Airtel, “Fair Usage policy is an internationally accepted norm among the global broadband operators. We have observed that few of our customers have been using an excessive amount of bandwidth, thus impairing the browsing experience of an overwhelming majority of broadband users. To ensure that all our customers enjoy the best quality broadband experience, we have introduced the “Fair Usage Policy”. This policy is aimed at encouraging responsible usage among the very few, who make inappropriate use of this service.”

Also, what has made the Airtel broadband users angrier is that, apparently, Airtel did this without informing them. Broadband users in India also fear that as Airtel has implemented this policy, other Indian ISPs will follow suit.

Airtel has capped the unlimited broadband data, so if the speed is reduced to less than the minimum 256kbps, in some of the cases, then as specified by TRAI, it ceases to be “broadband”.

One important question that the users are asking is that if there is a cap on the “unlimited broadband data”, then how can it be called as an “Unlimited Plan”?

We contacted TRAI about this. The regulator said that they are seeing this as a matter.