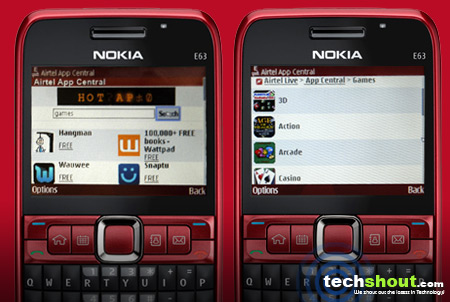 In the past, we have seen companies like Samsung and Apple launching their own individual App stores packed with loads of different applications. Although this concept was explored by product manufactures, Bharti Airtel Limited seems to be the first telecom provider to venture into this area. While its competitors are busy unfurling various types of SMS and calling schemes to entice customers, Airtel has gone one step ahead and unveiled a new, one-of-its-kind offering dubbed as the Airtel App Central. The company released this tantalizing terrain for mobile phones by mid-February and has since clocked 2.5 million plus downloads as of March 18, 2010. And why not, when the App Central is packed with over 1400 exciting apps and counting. We now go further and review just how this App Central really ‘app’ealed to us.

As Airtel reveals, the App Central is the first mobile application store of its kind to grace Indian soil. With more and more apps being unveiled at regular intervals, a plethora of various groups get covered and a lot of desired categories are seen touched upon. It also lets you add that personal touch to those cold steel and plastic mobile phones. The Airtel App Central includes Entertainment, Books, Games, Utilities, Themes, Lifestyle, Business, Social Networking, Travel, Reference and Weather. It also features Education, Navigation, Productivity, Finance, Music, Religion, Sports, Health & Fitness, News and Photography. We used the Nokia E63 handset to explore just what the App Central had to offer us.

Rightly known as a one-stop shop for applications, the Airtel App Central has something for everyone. In order to download and purchase your desired applications directly onto the handset, all you have to do is simply browse through the terrain to zero in on the exact app. To access this service, Airtel subscribers can simply long press the digit ‘0’ to enter the web and then opt for Airtel from where they can gain access to the App Central. They can even SMS the word ‘APP’ to 54321 which is a toll free number to acquire the URL. Once that is done you will be introduced to the wonderful world of apps where the only limitation would seem to be your imagination.

When accessing the Airtel App Central, we noticed that it didn’t face much lag and the pages opened pretty smoothly. On the home page of the offering were already some popular categories as well as some ‘free app’ suggestions. We first went to the Free Apps section where we were treated to around 40 titles. Each app displays the pricing details and a download button. If you want more information about that particular app, simply click on the name and it will divert you to another page. Once there, you can read what the app is all about and if satisfied, can simply hit the download button there itself. It will then confirm by asking whether you want to download and install the app. Users can espy the details of the app like what version, supplier, application size and format. It will then ask you whether to store it onto the phone directly or Memory card. For the Nokia E63 mobile, the apps were seen stored in the Installations folder which could be accessed from the menu. Although, while acquiring paid apps, it was observed to take a slightly longer time to download. Among the wide array, it seems like the Games section took the cake while Entertainment, Books, Themes and Lifestyle followed close on its heels. 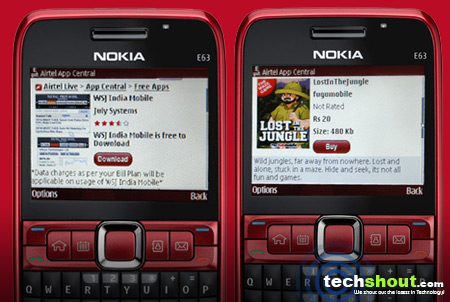 We downloaded quite a few apps that we found appealing. One of them was the Wall Street Journal India Mobile or better known as WSJ which is noted to be a free app as well. This particular app is apt for individuals who want to stay abreast with the all the breaking global and business news as well as instant analysis, charting, market commentary and real-time quotes. As cricket fever grips the nation thanks to the IPL, we see the App Central also buzzing with some interesting apps based on the sport. In this section, there was CNToonCricket, 2010 Twenty20 Premier League, Book Cricket among others.

Games appeal to a big slice of users across all age groups. There are a host of titles within the gaming option of the App Central which were categorized under different genres such as Action, Multiplayer, Racing, Arcade, Puzzle, 3D, etc. We tried our hand at a few of them namely 3D Sudoku and Frogger. The downside is that there are not many noteworthy titles in this category and the graphics aren’t all that appealing. A good point though that sets it apart from the Apple App Store is the prices. The Lifestyle category has some interesting apps like Wedding Clock, Dream Dictionary, Hand Reading Pro, Fookie and Quit Smoking. We found the Entertainment and Lifestyles apps were pretty similar to each other.

There are a lot of free apps to take advantage of while there are many paid ones as well. Some also offer a trial version for a certain number of days before charging a fee on daily, weekly and monthly subscriptions. Majority of the apps range from Rs. 25 to Rs. 99. Unlike the Apple App store, you do not need to sign up or pay through your credit card for this service. The payment for these apps is either added to the mobile bill or gets deducted from the available talk-time in your account, depending on the user’s scheme. All the acquired apps, may it be free or paid, can be espied within the My Purchase section which is located at the bottom of each page. These can be terminated at any given time by simply hitting the cancel button. We also observed that in some cases, the publishers are not recognized. When these type of apps are downloaded, a Security Warning pops up before downloading claiming that the application is untrusted and may be harmful to your phone.

Airtel subscribers can acquire easy, on-the-go access to the world of apps.

Users can also experience fast downloads without much lag.

The company offers a complete variety of choice to its customers.

Some of the apps are from unknown and unrecognized publishers which may get the user to think twice before downloading from these sources.

The company could have made searching a bit more appealing and easy.

You cannot try the app immediately when it’s downloaded. You have to navigate away from the web page and into the Installations folder.

With its apps widening as the days unfurl and its customers also expanding, we just have to see how far the new concept would blossom. As of now, the Airtel App Central houses a varied range of categories which are expected to suit the tastes and preferences of every mobile-wielding individual from all walks of life. This service is available to both pre-paid and post paid Airtel customers. We give the Airtel App Central 7 out of 10.