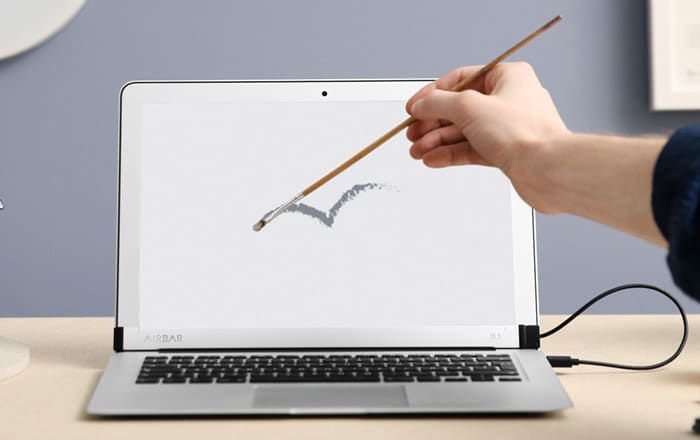 Apple has been woefully behind the curve when it comes to adding a touchscreen model to its line of MacBooks. It may never do so, but that doesn’t mean you can’t enjoy the benefits of an interactive screen without its help.

A Swedish company called Neonode is here to fulfill your wish by launching its $99 AirBar accessory for the MacBook Air at CES 2017. The magnetic device simply has to be plugged in to the laptop via a USB port and attached to the bottom of its screen to work its magic. Touch and gesture capabilities are automatically activated, with no additional installations or software required.

The AirBar performs its tricks with the help of the company’s zForce Air technology. The innovation emits an invisible light field over the display which detects touch from things like a finger or a paintbrush. One distinct advantage which the brand touts is the fact that the gadget gets rid of the added weight and glare usually associated with touchscreen laptops.

However, the MacBook Air has just 2 USB-A ports which might prove to be an issue. The MacBook Pro (2016) doesn’t have any, relying on 4 USB-C ports for connectivity. The AirBar notably doesn’t support the latter as of now because it needs at least 17mm of space below the display.

The AirBar is currently compatible with 15.6-inch Windows 10 notebooks priced at $69. Neonode plans to add support for 13.3-inch and 14-inch PC devices by early March. It’s then looking to widen support for more MacBook and Windows laptops within the first half of 2017.

You can pre-order the AirBar for MacBook Air via Neonode’s site. It’ll hit Amazon and the brand’s page in early March.