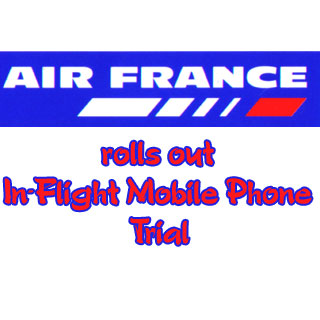 Around a fortnight back we had reported that JetBlue, RIM and Yahoo had rolled out a trial free In-Flight Wi-Fi initiative. Now there’s yet another good news for those who fly high above more often than remaining on the ground!

Air France has kicked off its very first in-flight mobile phone service trial onboard a single Airbus A318, which operates on European routes. Air France has joined hands with OnAir for the same. With this service, at first passengers will be able to send and receive text and picture messages along with emails through phones with internet access.

But, the second phase of this six-month trial will see passengers get the ability to make and receive calls too. It is also restricted to cruising altitude, once the new illuminated sign ‘Switch off your phone’ is turned off. The system is activated at 3,000 metres, which is about 10,000 feet.

Factors such as noise and disturbing telephone ringing are apparently going to be dealt with, as Air France claims that it will adjust the service “to maintain passengers’ comfort and well-being,”. Though it yet remains unknown as to how the company plans to do the same.

“We are seizing every opportunity to offer customers the latest technological innovations, while continuing to make their travel comfort and well-being our main priority,” said Patrick Roux, Executive Vice President Marketing Air France.

Benoit Debains, CEO of OnAir, noted, “We are delighted that Air France is the first airline to use the Mobile OnAir onboard mobile telephony system on international flights. This marks an important phase in the implementation of a new generation of in-flight services and we are confident that this trial will define the future standards in terms of in-flight passenger communication”.