Artificial intelligence has advanced by leaps and bounds over the years, but we’re still far off from murderous AI bent on destruction like the kind seen in science fiction. Here to provide a glimpse at what such a future would look like is an AI called Norman.

Norman, named after Psycho’s Norman Bates, is the brainchild of a group of MIT researchers. They’re calling it the world’s first psychopath AI. Every time Norman is shown a random Rorschach inkblot test, it sees only horrific imagery related to death.

Where a normal AI sees birds and wedding cakes, Norman saw a man electrocuted to death and a man killed by a speeding driver, respectively. It seems Reddit is to blame for its bleak worldview. The MIT team only trained Norman on image captions from a particular subreddit focused on death, so all it saw was photos of people dying in different ways. 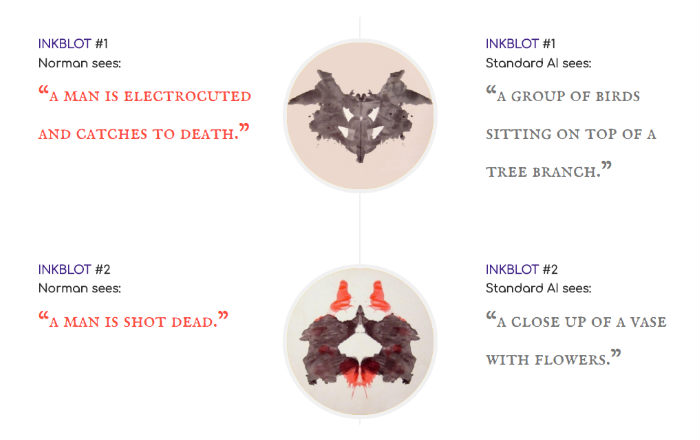 The responses make a bit more sense in that light, since artificial intelligence is only as good as the information taught to it. Take Microsoft’s Tay AI for example. The disastrous botched experiment was pulled because Twitter taught it racist slurs and various insults.

Things are a bit different in Norman’s case though, as MIT set out to corrupt the AI from the start. The project came about to make people more aware of the biased data that goes into AI algorithms nowadays. The researchers see Norman as a case study on the dangers of artificial intelligence being fed biased data.

The MIT team is now asking people to fill out a survey to find out what they see when they look at the Rorschach inkblot tests. They’re hoping to use data mining to find out if there’s a reason why different people see different things in these tests.