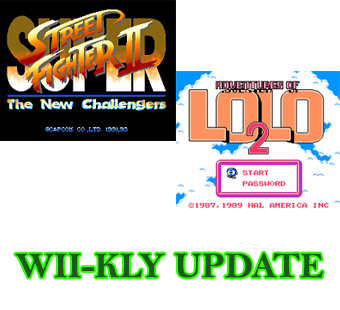 So what has Nintendo offered for its Wii gamers in its latest Wii-kly update? This time around it has offered games for the brain as well as the brawn.

Well cutting the suspense here itself, the games that Wii gamers can now enjoy are the “Adventures of Lolo 2” and “Super Street Fighter II: The New Challengers”.

Read on to know a little about each of the games:

Adventures of Lolo 2: This puzzle game was originally released in 1989 by Hal Corporation for the Nintendo Entertainment System. The single-player Adventures of Lolo 2 is the sequel to the original game titled simply Adventures of Lolo. In the new title Lolo plays the protagonists of the game along with Lala. After their return from the Haunted Castle, the Great Devil kidnaps Lala and puts across a challenge to Lolo to rescue her back. Lolo is put forth the challenge of the Great Devil’s Tower and Castle mazes. Thankfully, Lala ends up analyzing each of the mazes whilst she was taken to the tower and leaves clues in the Jewel Box of every room. And it further works as a chain link. Every Jewel that Lolo gets hold of gives him clues and information that will help him through in the next room. Furthermore, to achieve his goal, Lolo will have to push tiles, pick up Heart Framers, transform enemies in to Eggs for some time thanks to his Magic Shots and last but not the least avert enemy attacks by moving Emerald Framers. And of course it will be the intelligent players who will be able to Lolo and Lala to guide their way through to escape the Great Devil’s clutches and defeat him.

The “E” for Everyone rated title is available to Wii gamers for 500 points.

Super Street Fighter II: The New Challengers first hit the Super NES platform. The 1-2 player/s game is now available for 800 Wii Points. It has been given a “T” for Teen rating by ESRB.

So are you ready to play the newly announced Wii-kly update titles. Do let us know what’s your pick for the week!