Adobe has just given 3D printing an enthusiastic show of support with the latest Photoshop CC (Creative Cloud) version 14.2 update. For those who don’t know, CC is a cloud service which offers customers access to Adobe’s suite of software such as Photoshop, Illustrator and others which were previous sold as packages. The company only delivers these tools on subscription basis nowadays.

But that’s another story all together. The point is that the v14.2 refresh now lets Photoshop CC users design and edit in 3D. Additionally, the software will also allow for 3D printing directly from its interface. As Adobe says through its official blog, ‘Just click Print.’ All of the commands needed to create a 3D sculpture are crammed under a special 3D menu.

You’re obviously going to have to hook up a printer that can churn out the goods. In this regard, the upgraded Photoshop is compatible with well known ones like the MakerBot Replicator 2 and can virtually build stuff with materials such as metals, plastics, ceramics and full color sandstone.

– Would you eat your face if it were made of chocolate?
– New Amazon 3D printer store has Replicator 2, Afinia, Cubify Cube and more 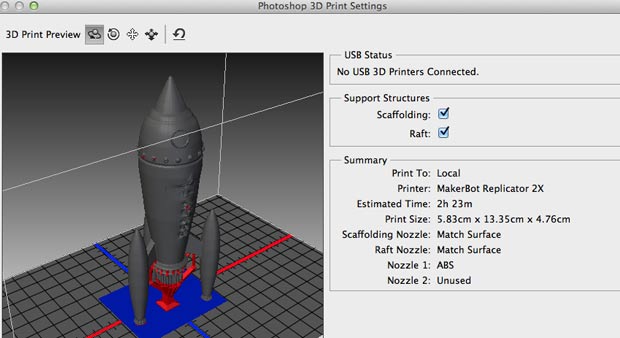 The video post above should give you an idea of how it works. Photoshop studies the task at hand and performs various operations such as scaling the output to a size the connected printer can handle, controlling the printer, delivering options to properly reinforce the model as it is being printed and so on.

Those who have a subscription to Adobe CC can already download the update and check out the changes.