The Adobe Photoshop Express app for Android has been blessed with a new update which is claimed to make the app more superior than its previous versions in many ways. Firstly, it has been optimized for the KitKat platform, and moreover, it has even been infused with a completely new image-rendering engine capable of handling large-sized photographs.

Still available for the much loved price of free, Adobe Photoshop Express has apparently been rebuilt from the ground up for this update. It has been fine-tuned to suit the KitKat OS, and it enables its users to access and process images stored on their SD cards in an even faster fashion. 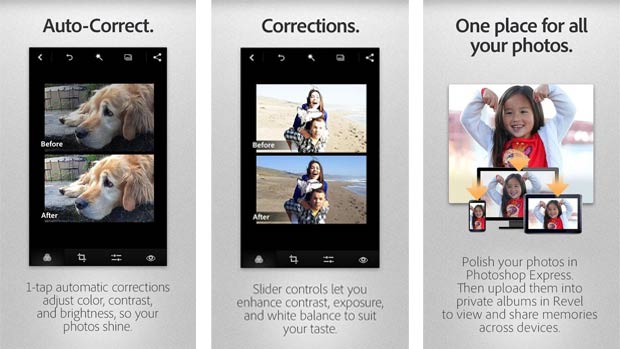 In an effort to make its prominent features easy-to-find, Adobe has pushed them the top. This means traits like looks (filters), cropping, red eye reduction and auto-correct can be spotted without much effort now. This also applies to the corrections menu which offers slider controls for adjusting exposure, contrast, highlights, temperature, tint and the likes.

Like we said, the Photoshop Express app from Adobe now runs the company’s latest image-rendering engine which is making its Android debut with the update. Apart from granting a boost in its performance, it even allows the software to handle large-sized files with ease.

And lastly, there’s direct integration with Adobe Revel, the cloud-based storage service for users to upload their photographs to. The new update for Photoshop Express is live now, and can be grabbed through the Google Play store for free.