Adobe Flash Player for Android 4.1 is not happening 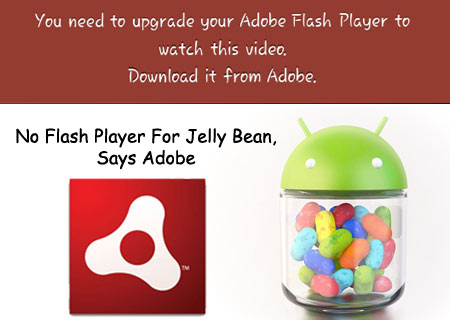 Those purchasing devices running on Google’s latest mobile platform or planning on upgrading their gadgets to the Jelly Bean OS, ought to know that there won’t be Flash Player for Android 4.1. And this isn’t all – starting August 15, 2012, Adobe plans on withdrawing the application from the Google Play store.

According to the San Jose-based developer, the company has neither developed nor continued to test the Flash Player for Android 4.1. To top it off, they don’t even plan on creating any certified implementations of the app for Jelly Bean. Users who update to Google’s new version of the mobile platform may notice unpredictable behavior as the application isn’t optimized for the OS.

“Devices that don’t have the Flash Player provided by the manufacturer typically are uncertified, meaning the manufacturer has not completed the certification testing requirements. In many cases users of uncertified devices have been able to download the Flash Player from the Google Play Store, and in most cases it worked. However, with Android 4.1 this is no longer going to be the case, as we have not continued developing and testing Flash Player for this new version of Android and its available browser options. There will be no certified implementations of Flash Player for Android 4.1,” reads a post made on the official Adobe blog.

It’s also recommended that the application be uninstalled from devices running the new platform to avoid stability concerns. Like we said earlier, Adobe will pull off its Flash Player app from Google Play. This means that users will not be able to download the plug-in for their smartphones and tablets. On the bright side, security updates for the add-on will continue to roll out for devices having the tool installed.

Adobe has listed 2 key reasons for discontinuing its Flash Player for Android. Firstly, various services offer premium experiences through applications and not the web. And most websites adopted for mobile phones utilize HTML for delivering video and other content.