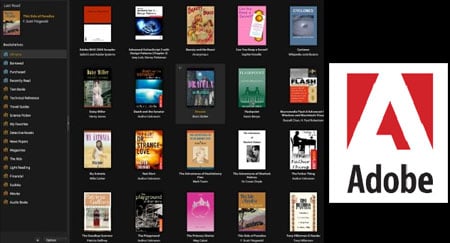 Today, Adobe announced the release of its much-anticipated Adobe Digital Editions 1.0 software for acquiring, managing and reading digital publications such as eBooks and digital newspapers.

This software application has been built from scratch and what’s more, it’s available as a free download for Windows as well as Mac systems.

According to Adobe, leading publishers, online retailers and channel partners have announced their support for Adobe’s Digital Editions software. The public beta of Adobe Digital Editions has generated over 300,000 downloads in less than six months.

Also, support for Adobe Flash software promises to enhance digital publications through the integration of rich audio and video.

One of the features of Adobe Digital Editions is that it enables users to annotate content through bookmarks, highlights and text notes. Besides, the library view offers advanced organization with multiple bookshelves.

Also, the new user interface of Adobe Digital Editions enhances zooming and the overall reading experience as a whole.

Another great feature of Adobe Digital Editions 1.0 is that is has support for the new IDPF Open Publication Standard (OPS) for XHTML-based re-flowable eBooks. This guarantees an amazing viewing experience.

The Adobe Digital Editions 1.0 download is less than 3MB and uses Adobe Flash Player technology which enables quick installation of the software. You will need Windows Vista, Windows XP SP2 or Windows 2000 SP4 Operating systems. Other system requirements include 500MHz or faster Intel Pentium processor, 128MB RAM and a monitor with at least 800×600 screen resolution.

Adobe Digital Editions 1.0 is available immediately for Windows and Mac systems from www.adobe.com/products/digitaleditions/. Besides, this software for Linux platforms as well as localized versions in French, German, Japanese, Korean and Chinese are slated to be released in the second half of 2007.