Activision is the Number One U.S. Console and Handheld Publisher for 2007: NPD Group 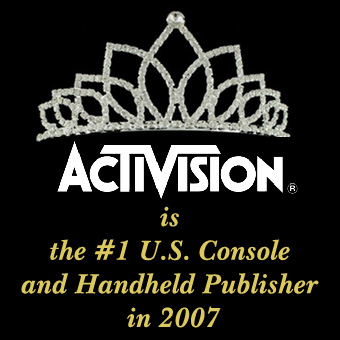 The NPD Group has revealed that Activation is the undisputed numero uno U.S. console and handheld publisher for the year 2007. On the other hand, while Guitar Hero has been named as the number one best-selling franchise in the U.S. for 2007, the distinction of the number one title has gone to Guitar Hero III: Legends of Rock.

The global market research company further announced that in December 2007, Guitar Hero III: Legends of Rock and Call of Duty 4: Modern Warfare(TM) dominated the number one and number three slots respectively as the best-selling titles in dollars across all platforms.

An obviously ecstatic Robert Kotick, who is the Chairman and CEO, Activision, Inc., said, “For the first time in our history, we were the #1 U.S. publisher for the calendar year. We are well on our way to delivering sixteen years of record revenue growth and by far our most profitable year ever.”

Santa Monica, California-headquartered Activision increased its market share for the year 2007 to a record 17.7%, a 7.2% increase over the same period last year. It posted net revenues of $1.5 billion for the fiscal year ended March 31, 2007.

Founded on October 1, 1979, Activision has the credit of being the very first independent developer and distributor of video games for gaming consoles. Beginning with the development of cartridges for the Atari 2600 video console system, in the present day it has been acclaimed as one of the largest third party video game publishers globally. And the latest announcement by the NPD Group is yet another feather in the company’s cap.