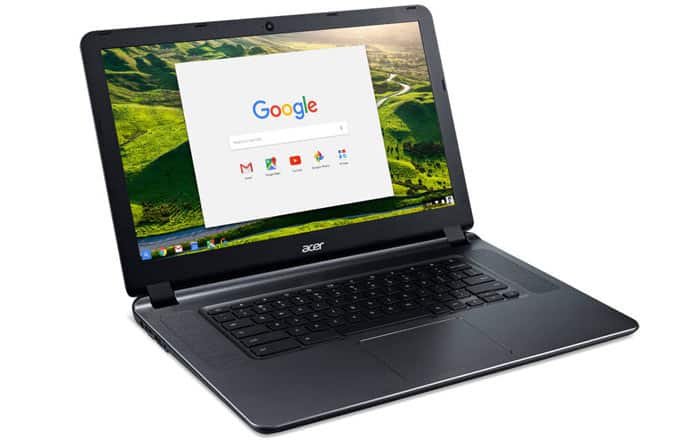 Acer’s released a brand new Chromebook 15 which improves upon its previous model in terms of battery life and build quality. The ultra-cheap laptop is now being sold via Walmart and will set interested buyers back by $199 (roughly Rs 13300).

The refreshed Chromebook 15’s primary appeal is still its 15.6-inch screen, an aspect which sets it apart from other notebooks in Google’s lineup. However, users will have to deal with a very average 1366 x 768p resolution when looking at said display. It’s probably a necessary sacrifice taking into consideration the device’s low price tag.

Other than the big panel, the Acer offering promises a very long 12-hour battery life. This is considerably higher than the 9 hours its predecessor could achieve between charges. The manufacturer has also upgraded the laptop’s connectivity options by adding a pair of USB 3.0 slots and faster 802.11ac Wi-Fi.

The brand touts that the fresh Chromebook 15 can survive over 130 pounds of force. It could even be dropped at a height of 2 feet and live to tell the tale. The notebook is notably low-end when it comes to specs, sporting just 16GB of storage, 2GB of RAM, and a 1.6GHz dual-core Intel Celeron N3060 processor.

A quick look at the main specifications of the Acer Chromebook 15:

Once again, you can buy the Acer Chromebook 15 via Walmart.