There are plenty of Chromebooks available in the market, but not all of them have touch-based display. The Pixel from Google which was announced back in February was the only laptop to run the Linux-based OS with touch input and it costs a bomb, retailing for $1,449 at launch. Well, you do get top-tier hardware and a gorgeous design for that price.

Acer has now unveiled an alternative to the Pixel through its C720P Chromebook that’s gone on sale at a fraction of the price which also means that the laptop will have downgraded specifications. The notebook is the second addition in to the C720 lineup which went official last month. The latest release is designed with an 11.6-inch 1366 x 768p ComfyView HD LED back-lit display with multi-touch input. 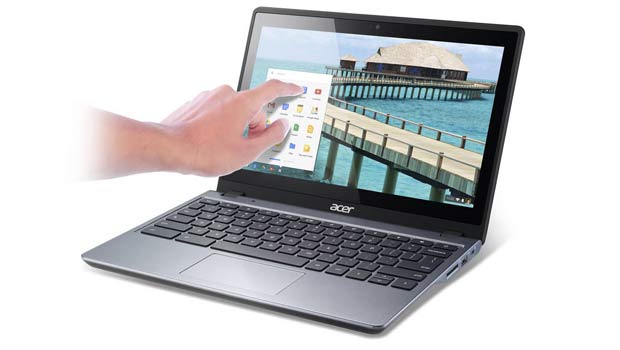 While a recent trend is to have an ARM based SOC power up Chromebooks, Acer has gone with the latest Haswell Celeron 2955U processor from Intel that not only offers a performance boost over the previous generation architecture, but also enhanced battery life. According to the company’s estimate, the C720P will be able to deliver up to 7.5 hours of activity.

Like most other Chromebooks, this one also boots up in around 7 seconds. There’s 2GB of DDR3 system memory for better multitasking and Wi-Fi 802.11 a/b/g/n for staying connected. Other features included here comprise of a 32GB SSD, an integrated HD webcam, USB 3.0 and USB 2.0 ports as well as HDMI output. The Chromebook C720P is 0.78 inches thick and it weighs 2.98 pounds.

The Acer Chromebook C720P will go on sale in the US early next month for $299.99. It will be available through Amazon, Best Buy and the company’s online store. On purchasing the notebook, you get 100GB of free Google Drive storage for 2 years and 12 free Gogo Inflight passes.