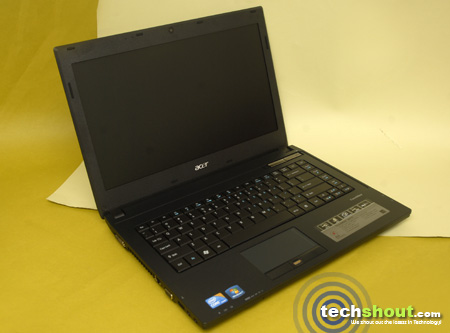 When Acer acquired Texas Instruments in February 1997, the latter brought along its popular TravelMate notebook lineup and might we say Acer fans seemed quite happy. The company took the TravelMate moniker quite seriously and we’ve seen a bunch of interesting laptops for the professional lot jumping out from those quarters. Keeping in mind the computing needs of the business class, this series has been bestowed with many enhanced attributes over the past few years. The Acer TravelMate 8472T notebook is what we’ve managed to have a fresh look at more recently. Read on our review to know whether this is indeed ‘one mate you’d want to travel with’ or just your average accompaniment.

Acer had packed in quite everything one would need to get started with a notebook. The bundle hauls in a power adapter, Quick Setup instructions guide, International Travelers warranty, a 1 year limited product warranty, Quick Guide and a cleaning cloth. We spotted the notebook in a classy all-black matte finish, adding to its appeal as a professional device. The top lid is scratch-resistant and bears just the Acer logo on the left, though it did invite a lot of dust. The lid also felt a bit frail when we opened the device. The notebook’s edges are rather sharp, and despite it tipping the scale at around 2.4kg with the 6-cell Li-ion it felt rather light in the hands.

The left brink of the laptop is outlined with the Kensington lock slot, the Acer EasyPort connector, cooling vents, Ethernet (RJ-45), VGA and USB 2.0 ports, mic-in jack and headphones/speaker line-out jack. Moving over to the right boundary revealed two USB 2.0 ports, Modem (RJ-11) port and a DC-in jack. This side also includes an optical drive complete with an optical disk access indicator and an emergency eject hole. The front edge shows off illuminated indicators for power, battery and HDD. Right next to it is the Multi-in-1 card reader that is enabled for SD, MMC, Memory Stick Pro and xD cards. The underside here holds front left and right speakers. 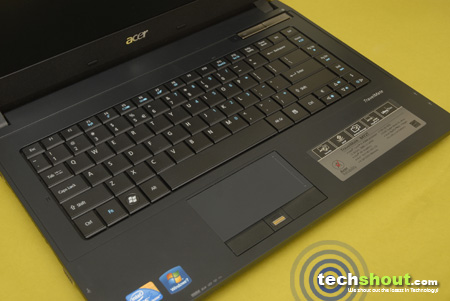 Almost naturally, our glance hovered to the extreme right when we opened this TravelMate model to see just what’s packed in. The Acer TravelMate 8472T is sinewy with a very robust Intel Core i5-430M processor running at 2.26GHz, 3MB L3 cache. The laptop is infused by an Intel HD Graphics, 4GB of DDR3 memory and a 500GB HDD. The 1.3MP Acer Crystal Eye webcam has been fitted on the uppermost portion of the display panel with a microphone placed adjacently. The words Acer are etched in the center right below the display. We noticed the 14” 16:9 HD LED LCD intersected to the main body with the help of noticeably flat hinges. The position of the hinges allows the display panel to be moved right behind, to give the notebook a flat or tablet-ish feel. Though the bezel holding the main screen is wide, we can’t really say if this area is as sturdy as we would have liked it to be.

Spanning the innards reveals a thoroughly clutter free device thanks to the ample amount of empty space. The full keyboard and trackpad hold their ground just right with the latter having enough wrist area too for a comfortable experience. The power button infused right above the keyboard gets a metallic treatment and has to be slid to get the PC on. It is accompanied by another steel button on its left which is a dual-intent one – one end is committed to indicate the wireless status of the laptop and the other one offers the Acer PowerSmart and Programmable key functions. It didn’t take the laptop more than 30 seconds to get started which we think is a pretty decent boot time. What caught our eye almost instantly as the display lit up was that the screen is anti-glare and reflective thanks to the matte scrub. Yes, for once we had a laptop that didn’t act like a mirror showing us our every expression when working. On a more serious note, the feature ensures comfortable computing in brightly lit and outdoor environs too.

It would be safe to say that the fitted keyboard is tactile and quite completes the typing experience with its well-spaced keys. We would have only preferred some more volume to the keys, but that’s really a personal choice. Acer has used the Fn function key combination’s in abundance. We liked in particular the Fn+F6 option that turned the display screen off instantly, saving power. There’s also a combination with the F7 key that toggles the touchpad on and off. Speaking of the touchpad, it’s backed by the Synaptics Pointing Device software which though not very extensive does allow you to configure it. The main trackpad area is wide and features the left and right click buttons separately right below it. Between these two buttons is the fingerprint sensor. The touchpad is well-equipped to handle a range of tasks right from pinch zoom and rotate by scrolling to two finger flick gestures and is also very smooth to use. 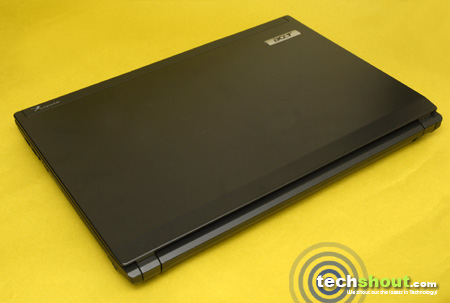 Connecting the Acer TravelMate 8472T notebook to a Wi-Fi network wasn’t a hassle at all. It was not just quick at identifying hotspots in the vicinity but also ensured seamless internet access. In fact connectivity is one department where the notebook left us more than happy. Whether it was a wired LAN connection, the Wi-Fi or sharing data over Bluetooth, the 8472T is upfront for most parts. Though the screen was at its best behavior when playing videos and movies, there was just this something missing in terms of quality of the content being reproduced. The audio quality of the embedded stereo speakers isn’t something to write home about. It’s very surprising that Acer should pack in such poor quality speakers in a laptop of this caliber. Until now, we’d spent a chunk of our day with the laptop and interestingly it was barely warm.

Acer’s Crystal Eye Webcam on this laptop is as simple as a camera could get. There is a distinct lag in processing images and we weren’t quite enthusiastic about the very basic features on offer. You can however tweak the brightness, contrast, saturation and sharpness before snapping up people or things. The minimal interface allows images to be captured in resolutions ranging from 320×240 to 1280×1024. Pick any option and any setting and the captured content is still as bad and we really wouldn’t recommend this one for video chats. As for videos, it only allows recording in a resolution of 320×240 with the quality being just about average.

It’s quite obvious that the machine isn’t the one that will have your multimedia needs satisfied. Besides being a downer on the audio and video front, the incorporated Intel graphics do nothing to enhance your gaming requirements too. If there’s a gamer under that dapper business suit, this is not the laptop you would want to be spending time with. The 32-bit Windows 7 Professional operating system makes computing however as effortless as possible. Acer definitely wasn’t joking when they said they’re offering an 8 hour battery life with this notebook. The laptop will get you through a day’s computing needs on medium usage. We received approximately 7 hours of battery juice with all the YouTube videos (volume on), writing this review, running the Tangled HD movie in the background (volume off) and checking of emails in between.

The cooling vents do a good job at keeping the laptop cool.

The laptop looks very chic and should appease the target audience just right.

The battery life gives it an upper hand over most of its counterparts.

The device did take long too charge, almost over an hour.

You can bet your money on the Acer TravelMate 8472T laptop being designed purely for the travelling professional. But sadly Acer probably thinks them to be a rather downbeat bunch, considering they’ve left out attention to multimedia needs. Otherwise the laptop carries the business tag well, performing tasks in Microsoft Office and documentation or checking emails and web browsing minus any glitches. With the battery life it proffers, it does seem prepared for an ‘always on’ journey. An 8 out of 10 is what this notebook scores on our rating meter.