Acer’s Liquid Z3 has gone official for Europe and it will be available for purchase towards the end of next week for a budget-friendly price of just €99. The Acer handset is the sixth addition in the company’s 2013 lineup which includes the recently launched S1, the E2 which made its debut in April and the E1, Z2 as well as C1 that went live earlier this year.

For the said price, the Liquid Z3 tags along entry-level specifications capable of providing buyers with a good deal of entertainment features. The Android 4.2 Jelly Bean platform is in the driver’s seat and there are various specials from the company onboard. The targeted audience for this smartphone is basically youngsters and newcomers to Google’s mobile OS. The interface has been modified to suite different types of users. Through Quick Mode Profile, owners can flip between 4 modes. They include Basic that’s focused around calling as well as texting, and Senior which is optimized for messaging, FM radio, quick calling and magnification amongst others. 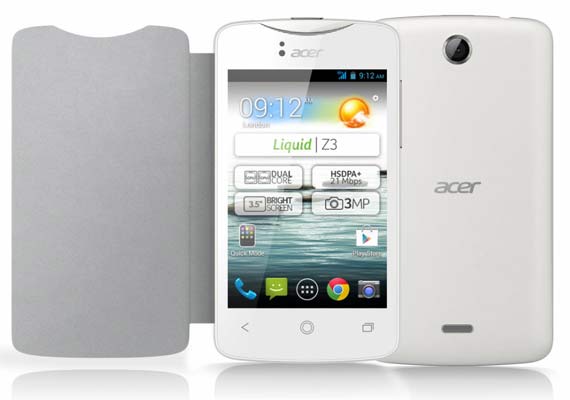 Classic optimizes the UI and all of its contents into an intuitive layout for first time users, while Keypad is designed for those who commence voice calls frequently. The company’s cloud service has also been integrated into the Acer Z3 along with connectivity options of Wi-Fi, GPS and more. The device comes with dual SIM slots and is powered by a 1GHz dual core processor. The features list also has a 3.5-inch display, a 3MP rear camera, 4GB of ROM (possibly 512MB of RAM) and HSPA+ cellular support.

The aforementioned price for the Liquid Z3 is likely to differ based on location. The company notes that the smartphone will go on sale in Ukraine, the UK, Germany, France, Netherlands, Italy, Russia, Belgium and Spain during mid-August in color options of rock black and classic white. Various accessories including flip covers and replaceable back panels have also been announced that will arrive drenched in several shades.