Sony and Samsung are going to be rather miffed; Acer’s Liquid S2 has just been announced with a 13MP, 4K camera. The smartphone has been revealed ahead of the IFA 2013, undoubtedly with the intention of grabbing as many roving eyeballs as possible before the event begins.

The camera on the Liquid S2 is capable of shooting 3840 × 2160p UltraHD videos, a feature many have been looking forward to ever since Snapdragon 800 and its 4K video capturing support were revealed back in January. The Samsung Galaxy Note 3 (via CNET) and Sony Honami were the only devices rumored to release with 4K shooting until now. 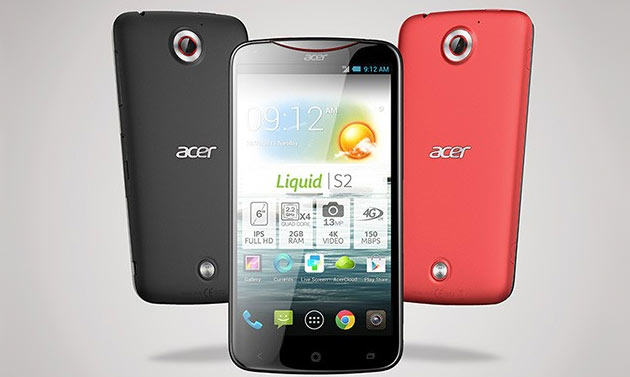 And it looks like Acer beat them to the punch with the S2. The front camera is a 2MP one which can take 1080p clips. Just in case you’re wondering where you were going to put all those high resolution, memory-gobbling videos, the company has mentioned 128GB of expandable storage in addition to the 16GB onboard. The phablet features a 6-inch HD IPS display, 2GB RAM and the Snapdragon 800 quad core processor clocked at 2.2GHz.

Although the appearance is decidedly low-end, the smartphone’s specs sheet sort of makes up for it. A 3300mAh battery powers the device and Android 4.2.2 mated with the Acer Float UI runs the show. 4G, Wi-Fi 802.11ac/a/b/g/n, Bluetooth 4.0, GPS with GLONASS and NFC pop up among the connectivity features. All of this technology fits into dimensions of 166mm x 86mm x 8.99mm and the touchscreen is protected by Corning Gorilla Glass 3.

The phone will be available in shades of red and black by the end of October. Pricing details will have to wait.