Acer has revealed the Liquid S1 Duo release date and the handset has showed up in the UK along with a price. It will be available for purchase starting August 5. This Acer Liquid device is said to be the first phablet from the company and while it was announced back in June, it’s yet to make its debut around the globe. Well, the country in question will be the first in the list, but only the dual SIM version is scheduled for launch, or so suggests a price listing on Expansys.

The Liquid S1 Duo will compete against the Note 2 and Ascend Mate amongst other phablets. Where the display size is concerned, it basically falls in between the 2 aforementioned handsets. The device has a 5.7-inch touchscreen which proffers HD visuals in 1280 x 720p resolution. The form factor here has a minimal appearance and it features aluminum grips on the sides, while the overall weight is pegged at 195 grams. The phone is powered by the Android 4.2 platform and hopefully, the company plans on bringing the device to version 4.3 Jelly Bean. 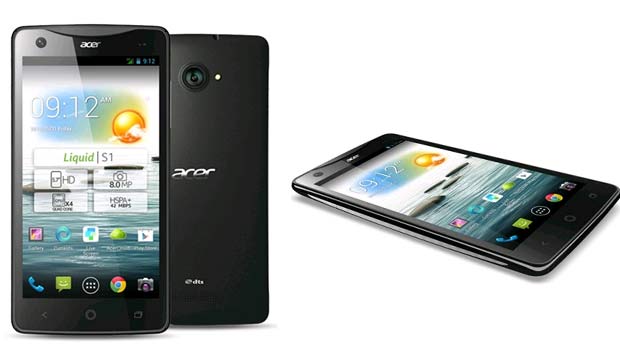 Bundled with the OS are various UI enhancements, one of which is the company’s own Float interface which aims to enhance multitasking by allowing users to run multiple applications on the screen simultaneously. The Acer Liquid S1 Duo is being deployed with 1GB of RAM, 8GB of flash storage, a MediaTek MTK 6589 quad core 1.5GHz processor, an 8MP camera, Bluetooth 3.0, Wi-Fi a/ac/b/g/n and a 2400mAh battery.

While the S1 Duo is scheduled to release on August 5, there’s no word on the official launch for the single SIM version. The unlocked price for the dual SIM option is pegged at £299.99. A post on Unwired View notes that the smartphone will also go on sale in Taiwan next month for TWD 12,900.