Acer Liquid E2 price gets a mention, quad core CPU and Jelly Bean in the offering 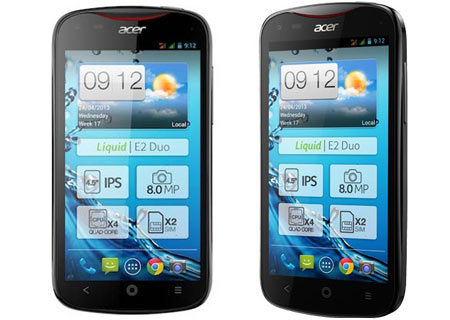 Acer has announced that its 2013 portfolio is about to get bigger with the Liquid E2 going official and being the third addition to the lineup, the price for the device is set at €229 for Europe.

Compared to the E1 that made its debut earlier this year, the Acer Liquid E2 brings in a host of enhanced components. However, there are a few specifications that have seemingly remained untouched. For starters, the display size is still at 4.5 inches proffering a capacitive IPS touchscreen with qHD resolution. The internal storage capacity has passed through unmodified as well, with 4GB of hoarding space in the offering. Additionally, there’s 1GB of RAM and a microSD card slot which can take on up to 32GB.

The company states that the Liquid E2 will come in 2 flavors. One will pack in a single SIM slot, whereas the other will bear support for dual cards. Both ports are like to support HSPA+ 42Mbps, GSM and EDGE networks. The Jelly Bean OS runs the show and there’s no mention of a custom skin layered over it. So, potential users can expect somewhat of a pure Android experience.

One of the main highlights is that the Acer Liquid E2 is the first from the manufacturer to come with a quad core processor. While the make and architecture haven’t been disclosed, we suspect this CPU to be Cortex A7 based which has been the preferred option in recent smartphones owing to its high power-efficiency. An 8MP camera is fitted onto the rear and it’s capable of delivering 1080p videos at 30fps and zero shutter lag. Users can expect 8 hours of talktime or 450 hours of standby with the included 2000mAh battery.

The Acer Liquid E2 is scheduled to go on sale in Belgium, Netherlands, Ukraine, France, Spain, UK, Italy, Germany and Russia from mid-May onwards. It will be available in color options of rock black and classic white.