Acer Liquid E1 and Z2 announced ahead of MWC 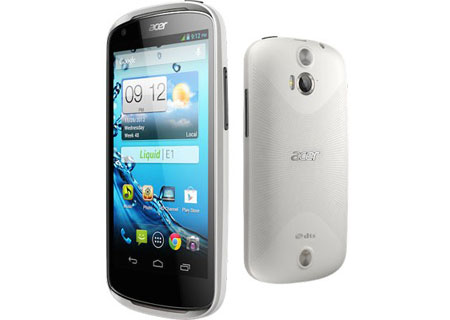 The Acer Liquid E1 and Z2 have been announced and will be the latest in the series. The phones are to debut at this year’s MWC in Spain and come in pearl white and carbon black color options. Recently we got wind of the C1 belonging to the same series, which was headed to Thailand.

The Liquid E1 is targeted at those who base the quality of their experiences around multimedia. So much does it focus on immersion when viewing media that it comes with something called a Float Caller notification, which allows just a tiny pop-up window to alert users to incoming texts and calls when watching a video. It has a 4.5-inch qHD screen with IPS technology and will bring to users the convenience and usability of the Jelly Bean platform with the company’s own UI 5.

Running operations will be a 1GHz dual core chipset with 1GB of RAM to fall back on and a 4GB ROM. Dual cameras featured on the device will consist of a 5MP primary imager with auto focus, LED flash and zero shutter delay, and a 0.3MP front-facing webcam. Adding to its multimedia appeal will be dual speakers and DTS sound, while connectivity options will include Bluetooth 3.0 + EDR, Wi-Fi and the choice between single and dual SIM versions.

The Z2 on the other hand is more of an entry-level handset, although it too makes use of Android 4.1 Jelly Bean. Screen real estate is harder to come by, with a 3.5-inch HVGA display adorning the gadget. Along with 512MB of RAM and an externally expandable 4GB ROM, a 1GHz processor makes itself comfortable under the hood.

This one too can be specified in dual as well as single SIM models and offers a choice between a 3MP and a 5MP camera. Wi-Fi, Bluetooth 3.0 with EDR and A-GPS are other features shared with the slightly higher device. In addition, it understandably gets a smaller 1,300mAh battery to the above handset’s 1,760mAh power unit.

Price and release date information for the Acer Liquid E1 and Z2 have yet to be announced. Unfortunately, the phones don’t seem as if they’re headed to India, with a launch scheduled for France, Belgium, Netherlands and Ukraine, followed by Russia, UK and Italy, across selective retail and online sources.