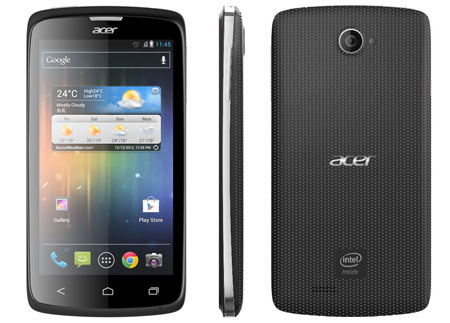 Along with its price, the Acer Liquid C1 release date has also been thrown out in the open by Intel which will be providing it with its processing hardware. Equipped with the latter’s recently unveiled Lexington chipset, this handset is all geared up to launch in Thailand during the Mobile Expo event that is slated to commence on February 7 and continue through February 11. It will be available in the said country for THB 9,990 (VAT inclusive) which roughly translates into $335.

The Liquid C1 has been granted quad band capability and Acer Cloud support, and is being claimed to be the first smartphone in the Asia Pacific region based on the Intel Atom processor Z2420. However, we’ve already seen this chipset on Indian brand, Lava’s Xolo X500 which has hit availability status. The said CPU has been clocked at 1.2GHz, and holds on it the Hyper Threading technology which apparently manages its resources efficiently, allowing multiple threads to run on each core.

This phone even carries an Intel XMM 6265 slim modem with quad-band capability. It displays its visuals on a 4.3-inch IPS touchscreen with a qHD resolution of 960 x 540 pixels. The Android Ice Cream Sandwich OS makes its way into it, along with an 8MP shooter with auto focus and an LED flash. There’s even a VGA front camera on it for users to be able to indulge in video chats.

The internal hoarding capacity of this device has been locked down at 4GB, but there’s scope for expansion thanks to its microSD card slot which supports 32GB of added storage. Essential connectivity features such as Wi-Fi 802.11 b/g/n, GPS, Bluetooth 2.1 with EDR, a microUSB port and more find their way into the phone as well. 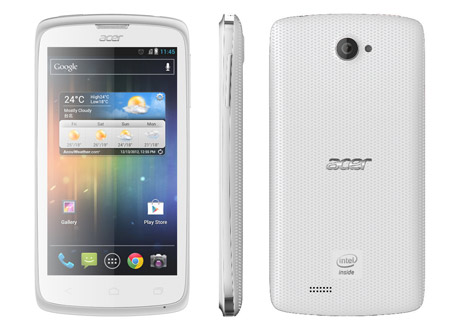 Its dimensions have been set at 127.3mm x 65.5mm x 9.95mm, while its weight stays put at 140 grams with the battery in tow. Speaking of which, the power source that is present within the device is a 2,000mAh one, the exact lasting times of which are unknown as yet.

The Acer Liquid C1 will start being sold at the Mobile Expo event itself, where a special promotion will also be bundled along with it. Following its stint at there, it will be made available through retail outlets in the weeks to follow. It is unclear as to when it will be released in other Asia Pacific nations.