The Iconia W3 from Acer may just be heading down a dead end as it can be picked up in the US for $80 less than its original price. This reduction in the price comes just 2 month after the device went official. It looks like Acer plans on finishing off remaining stock to possibly make room for a successor or has an intention of boosting sales of the first Windows 8 tablet to come with a display that’s below the standard 10.1 inches.

Window 8 slates have seemingly lost their fizz in the past few months. We’ve seen the Microsoft Surface RT get major reductions in its retail amount and now, the Pro model is being offered on discount as well, for a limited time. The new retail tag for the Iconia W3 looks to be permanent as multiple retailers have adopted the cut. One of the benefits of picking up this slate is that it comes with the Microsoft Office Home & Student 2013 preloaded which is valued at $139. Additionally, it has a lightweight form factor of just below 500 grams and a slim design which measures 10.16mm thick. 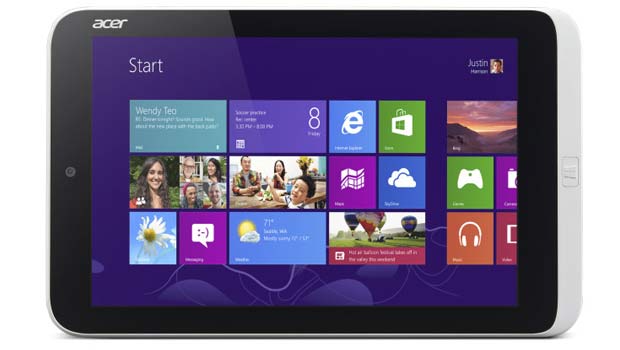 The device packs an 8.1-inch CrystalBrite LED backlit display with 5-point touch input and 1280 x 800p resolution. The front also dons a Crystal Eye full HD webcam, while a second one can be found on the rear as well. Being a Windows tablet, you can expect to find a microSD card slot, a microHDMI port, Bluetooth, and Wi-Fi 802.11b/g/n. On the hardware front, it packs a dual core 1.5GHz Atom Z2760 processor, 2GB of RAM and a 2-cell battery that can deliver up to 8 hours of usage.

The Acer W3 is now available for a starting price of $299 with 32GB of storage through the Microsoft Store. Ubergizmo notes that the tablet can also be picked up from Amazon and Staples which are offering the $80 discount as well. The 64GB model is listed at $349 or $314 for students.