A few days back we reported that Acer was working on the Iconia 7 A1-724 voice calling tablet and while we expected the device to go official with the same moniker, the company has launched it as the Iconia Talk S, at least in its hometown. The device is as expected, a voice calling slate which is clearly evident from its name.

The Acer Iconia Talk S will also be known as the company’s first 64-bit enabled slate. The device isn’t high-end as it features the entry-level Snapdragon 410 SOC. And don’t expect it to show the benefits of the new CPU architecture out of the box, mainly because it comes with Android 4.4 KitKat pre-installed and support for 64-bit chips is only enabled in version 5.0 Lollipop. 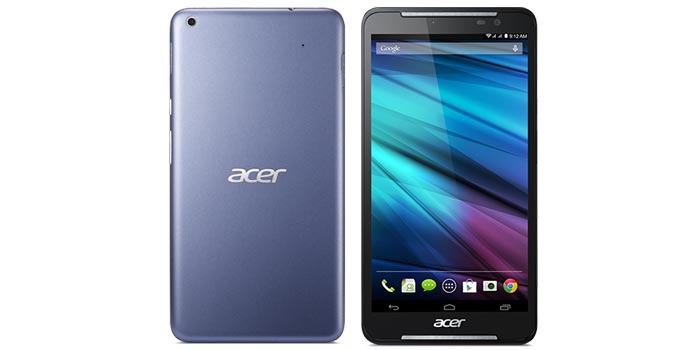 Well, the slate will definitely get bumped to the new platform, but there’s no word on how long it will take. Another great feature of the Acer tablet is that it offers 4G LTE connectivity for high speed data access.

The screen on the front is 7 inches wide proffering 720p HD visuals and is surrounded by slim bezels. There are what appear to be dual speakers as well, and a 2MP camera accompanying the display. On the rear, a 5MP camera (no LED flash) has been positioned to the top left corner.

Below is a quick look at the Acer Iconia Talk S’s specs:

PhoneArena notes that the Acer Iconia Talk S will go on sale in Taiwan for around $250. There’s no word about the slate getting a global release, but we doubt the company will hold back such a devices when there’s potential for it to sell in many markets.