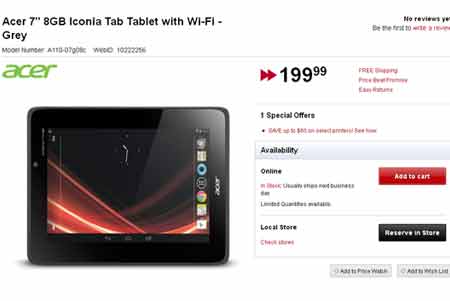 The price for the budget-friendly quad core Nexus 7 competitor, the Acer Iconia Tab A110, has been disclosed while also gaining availability status in the US and Canada meeting the previous slated launch date. This 7-inch tablet comes preloaded with the Android Jelly Bean platform providing users access to a wide range of digital content and the latest offerings from Google.

Acer has designed this piece of hardware to be highly portable. The Iconia Tab A110 weighs just about 0.85 pounds and measures 0.85 x 5.0 x 0.4 inches in dimensions. An Active Matrix TFT LCD touch panel measuring 7 inches diagonally sits pretty on the front proffering a WSVGA resolution of 1024 x 600 pixels and an aspect ratio of 128:75. Powering up the slate is a quad core Tegra 3 processor from Nvidia that’s clocked at 1.2GHz, a 12 core GeForce GPU and 1GB of LPDDR3 RAM. 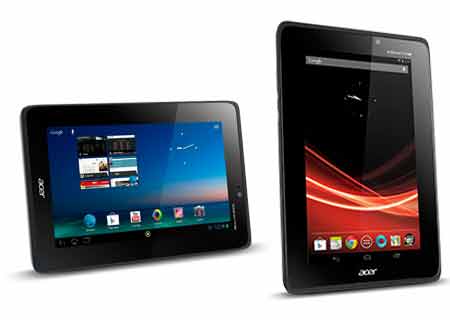 The built in hoarding capacity here amounts to 8GB. And unlike the Google Nexus 7, this one comes pre-loaded with a microSDHC card slot for memory expansion purposes. On the connectivity front, users will have wireless options such as Wi-Fi 802.11 b/g/n, GPS and Bluetooth as well as various ports including microHDMI and microUSB 2.0. The device arrives drenched in gray packing in a 3420mAh Li-ion polymer battery that’s capable of delivering up to 7.5 hours of activity.

The Acer Iconia Tab A110 is available through the company’s online store in the US for $229.99, while potential buyers in Canada can pick up the quad core tablet through Future Shop for $199.99, that’s $29 less than the previously disclose retail cost.