Along with new smartphones, Acer also unveiled a high-end tablet, the Iconia Tab 8, which runs on the latest version of Android 4.4 KitKat and is powered by a quad core Intel Bay Trail processor. The slate is designed to be light and slim enough for carrying around in a single hand and it comes with various entertainment-oriented features.

The slate has an 8-inch IPS display as the name would suggest designed with the company’s Zero Air Gap technology. The panel proffers visuals in 1920 x 1200p resolution at 16:10 aspect ratio. There’s also an anti-fingerprint coating. Accompanying the display are dual speakers for rich audio output. The tablet is 8.5mm thick and it weighs 360 grams. The overall form factor features a metallic finish. 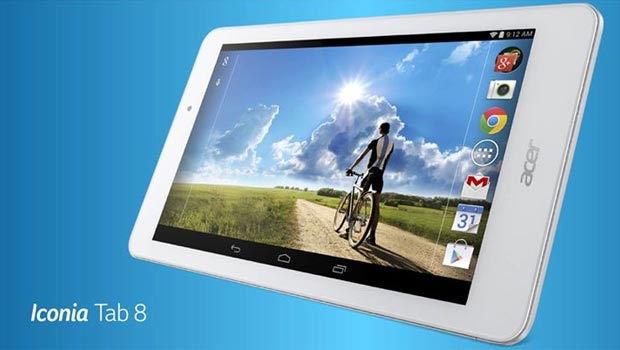 On the inside, there’s the Intel Atom Z3745 SOC which has a base frequency of 1.33GHz and a boost clock speed of 1.86GHz. The chipset is apparently 64-bit ready and comes with Intel HD graphics. The device is capable of delivering 7.5 hours of battery life of continuous video playback. Other features include a microSD card slot and 802.11a/b/g/n Wi-Fi with MIMO technology.

The tablet also offers front and rear cameras of unknown resolution. Acer has left out various other key features of the slate, but notes that specifications will be made official along with price and availability details in the future.