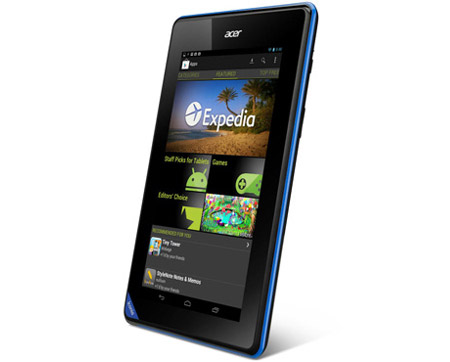 The price for the Acer Iconia B1-A71 has been given a mention, if only roughly, as the tablet focuses its sight on new users and families opting for a second device. At a glance, the 7-inch slab offers a Jelly Bean experience at almost 720p and a fair deal of internal storage, while a Mediatek processor handles the operations.

The Iconia B1-A71 features a 7-inch WSVGA capacitive screen capable of multi-touch. It displays visuals in a resolution of 1024 x 600 pixels. The company has revealed that it takes advantage of the latest Android platform, Jelly Bean, but doesn’t mention the exact version of the OS. Subsequently, access to the Google Play store is afforded.

A dual core Mediatek CPU (MTK 8317T) manages the tablet’s functioning, running at a cool 1.2GHz. This, the company says, facilitates smooth gaming and web browsing. Internal memory amounts to 8GB, but is expandable all the way up to 32GB via the insertion of a microSD card in the slot provided. Just how much RAM the device hides away under its façade, hasn’t been revealed.

The slab from Acer has a VGA quality, 0.3MP webcam on the front, and the company hasn’t specified the presence of a higher resolution primary snapper on its rear. So potential buyers will have to make their peace with just front camera functionality. In terms of connectivity there is Bluetooth 4.0, GPS and Wi-Fi. And what’s more, for some queries made through Voice Search, users can get spoken results.

The device measures 197.4mm x 128.5mm x 11.3mm in dimensions and weighs about 320 grams. It has a 2710mAh battery, but usage stats haven’t been provided and it isn’t clear how many hours can be squeezed out of it. Rounding up the tablet’s features are a 3.5mm audio jack and an internal speaker.

Although the manufacturer hasn’t been forthcoming with a release date, the Acer Iconia B1-A71 will be made available starting at just below the $150 mark. It will join the company’s tablet family, slotting in with the likes of the Windows 8 hybrid W5 and the W7, as well as the Iconia A, all coming at a much higher cost.