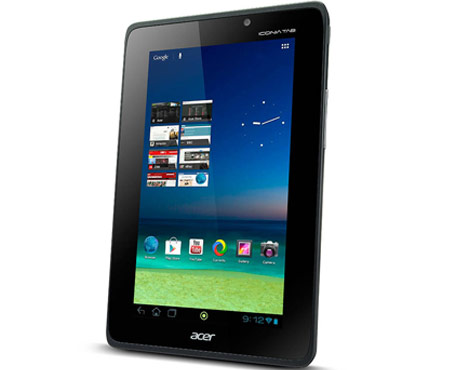 The Jelly Bean-powered Acer Iconia A110 release date and its price have been announced for those who are not too keen on grabbing a Windows 8-based device. The pocket-sized tablet packs in a punch in the form of a quad core processor and a powerful battery that claims to cough up the juice for close to 7.5 hours.

Based on the latest Android 4.1 platform, the compact piece of hardware flaunts a 7-inch multi-touch display that can project visuals in 1024 x 600p resolution. It weighs close to 0.86 pounds and measures less than half-inch in thickness. While the slate offers access to thousands of applications from the Google Play store, it comes pre-loaded with apps like Google Currents and features entertainment hub for music, videos, books, apps and more.

This slab is fueled by 1GB of RAM and the Nvidia Tegra 3 4-Plus-1 quad core chipset that enable users to multitask, watch HD videos, play games and experience fast web browsing speed. The CPU’s fifth battery saver core works towards improving the power life and providing a long battery life of about 7.5 hours. There’s a microSD card slot to increase the memory by up to 32GB, in addition to a microHDMI connector and a microUSB 2.0 port. The Bluetooth-certified device ships with 8GB internal memory and a 2MP front-mounted webcam too.