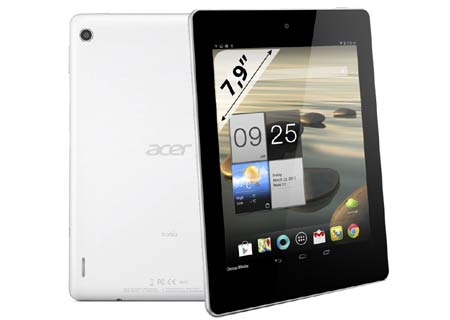 Acer seems to have a new tablet in the works dubbed Iconia A1-810, and it will apparently go neck and neck with the iPad mini by carrying a competitive price of €199. Apart from the budget-friendly retail amount, this 7.9-inch slate will house a quad core processor and operate on the Android 4.2 Jelly Bean platform which is the latest from Google’s stable.

While a white version has been flaunted online, there’s no word on additional color options. The A1-810 tablet will weigh 460 grams after cramping in a host of components including a TFT LCD IPS panel that proffers a resolution of 1024 x 768 pixels and a 10-point touch. The SOC employed here has a 1.2GHz MT8125 quad core CPU from MediaTek and an entire gigabyte of RAM. 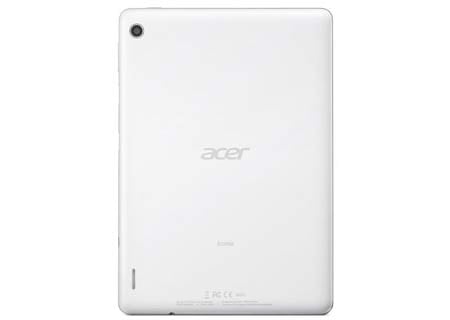 Users will be able to store up to 16GB of data internally and they can also slide in a microSD card with up to 32GB of hoarding capacity. Fixed onto the device are dual cameras, a 0.3MP front webcam and a 5MP snapper on the rear, while a stereo speaker is fitted on the top.

Tucked away within the slab’s 10.5mm slim form factor is a Li-Polymer batter that has a 3250mAh capacity. According to the provided estimates, the tablet will be capable of delivering approximately 7 hours of video playback, 5 hours of YouTube streaming or a modest 350 hours of standby. Sensors such as an accelerometer, gyroscope and light have been included as well.

The Acer Iconia A1-810 will apparently be selling for €140 less than the official amount of Apple’s 16GB miniature iPad. Unwired View reports citing MiniMachines that the device’s release date should fall during early June as it is expected to be in stock with French online retailer Rue Du Commerce on the 3rd of the said month. The post also points out that a 10-inch tablet is likely to be launched later this year as part of the company’s goal to achieve 7 million slab sales this year. 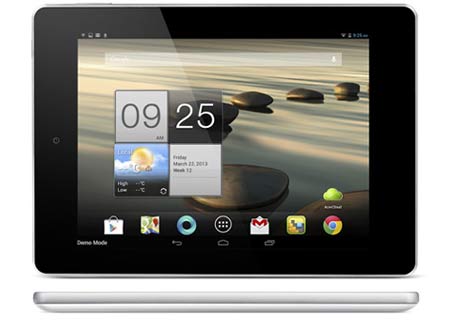