We already know that Acer is working on a new voice calling tablet called Iconia 7 A1-724 and we’ve already seen what the device looks like thanks to leaked press images. Well, now we’ve also gotten a good look at the slate’s specifications as it recently got benchmarked and someone made the mistake of posting the results online.

GFXBench which has been the source of many gadget leaks over the years is also responsible for revealing information on the Acer Iconia 7 A1-724. The benchmark listing highlights that the device will come with a 64-bit processor, a 1.2GHz quad core Snapdragon 410 based on the Cortex A53. 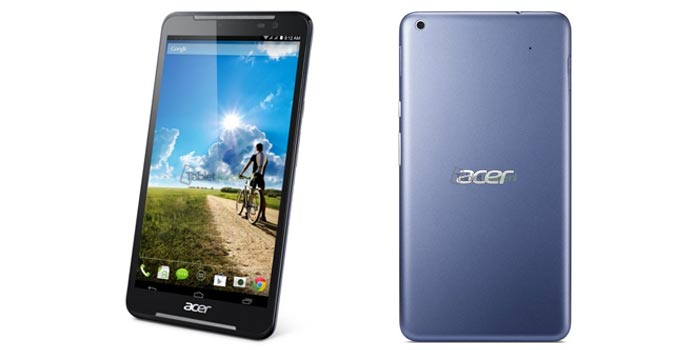 As is visible in the above image which was leaked by TabletGuide back in October, the tablet will have dual front-facing speakers and even voice calling support. Additionally, the screen which is 7.1 inches wide will be surrounded by slim bezels on two sizes. The slate is capable of delivering visuals at 1280 x 720 pixel resolution.

Also read: Verizon Ellipsis 8 tablet with XLTE is official and on sale

Like the other members in the Iconia 7 A1 series, the upcoming one will also be an entry-level release. The slate will offer just 1GB of RAM and storage is listed as 12GB user-accessible which means that there will be 16GB ROM. Other features include a 2MP front camera and a 5MP rear snapper.

There’s no information on when the Acer Iconia 7 A1-724 will go official, but we’re likely to see it make its debut this year itself.