Acer’s C720 Chromebook is official, up for grabs in US and India

Following the recent launch of HP’s Chrome-based laptop, Acer has announced the arrival of its new Chromebook, the C720. Unlike, the former that packs a dual core Exynos 5 processor from Samsung, this one is powered by an Intel chip from its latest generation lineup.

The Acer C720 Chromebook has gone official in the US and the company has also disclosed that it is available for purchase in India. Compared to its predecessor the C710, this laptop is said to be slimmer by at least 30%, at 0.75 inches, and it is lightweight too weighing 2.76 pounds. There’s a Haswell based processor ticking on the inside, the Celeron 2955U that’s clocked at 1.4GHz, and support for 4GB of DDR3L RAM. 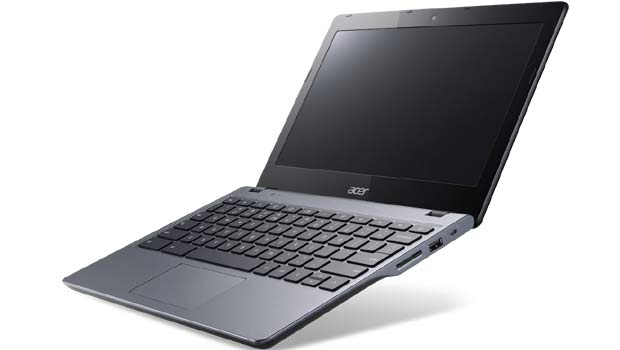 Based on what Acer claims, the laptop is capable of starting up in approximately 7 seconds and it can deliver quite an impressive battery life of 8.5 hours. The Chrome OS is displayed through 11.6-inch ComfyView HD anti-glare display, while an HD webcam permits video calling. There’s also a full-sized keyboard and dual speakers. Where connectivity is concerned, the C720 Chromebook has a wide offering. There’s Wi-Fi 802.11 a/b/g/n, USB 3.0, USB 2.0, an SD card reader and an HDMI port.

Acer notes that the C720-2800 model is now available for order through Amazon and Best Buy at $249.99. This notebook comes with 4GB of RAM and a 16GB SSD. Indian customers will be treated to a C720 Chromebook that has 2GB of RAM and a 16GB SSD for Rs 22,999. The laptop can be picked up through Croma and Reliance Digital in Mumbai and Delhi. Also, Flipkart will stock the device soon.