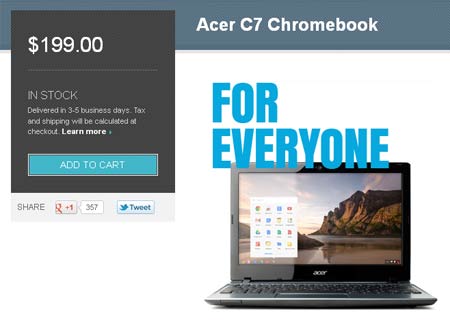 The price for the Acer C7 Chromebook has been divulged by the company and based on the latest details, the laptop is up for grabs through various nation-wide retail stores in the US. This notebook is the Taiwanese manufacturer’s latest addition to its Chromebook series which includes the AC700 that was launched back in July 2011.

Featuring an easy-to-use interface and a quick boot-up time of ‘mere seconds,’ the C7 Chromebook is designed with a slim form factor that measures less than an inch in thickness. Apart from being compact, it is even lightweight, bearing a mass of not more than 1.38kg. Tucked away within its framework is a Celeron 847 processor from Intel proffering a 2MB cache and a clock speed of 1.10GHz. The NM70 Express chipset lays the foundation here, rendering support for HD graphics with 128MB of memory. While 2GB of RAM comes as default, users can throw in a total of 4GB for better performance. 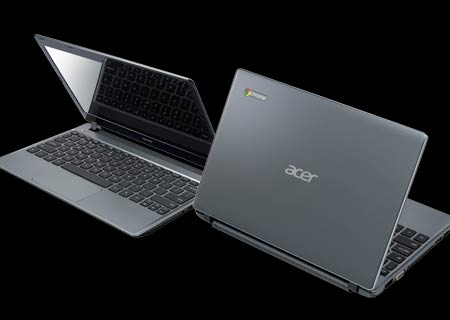 Visuals are delivered through an 11.6-inch CineCrystal TFT LCD that has a 16:9 aspect ratio and a resolution of 1366 x 768 pixels. Users will have a 320GB SATA hard drive which operates at 5400RPM, for hoarding content. Compared to Samsung’s latest Google-powered laptop, the device has its CPU clocked at a lower speed and there’s also no USB 3.0 support. Additionally, the former comes in a 3G version supporting cellular networks and it even boasts of greater battery life. The previous generation devices from the South Korean conglomerate include the Series 5 and the Chromebox which is much like the Apple Mac mini. 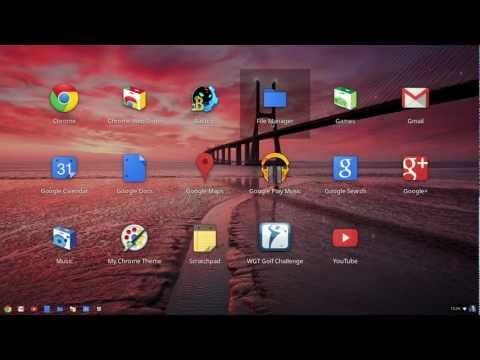 The Acer C7 Chromebook is available for purchase at a cost-effective price of $199.99. It can be picked up via various retail outlets and through online stores in the US operated by Best Buy, TigerDirect, NewEgg and Staples. The laptop is up for grabs on Google Play as well. 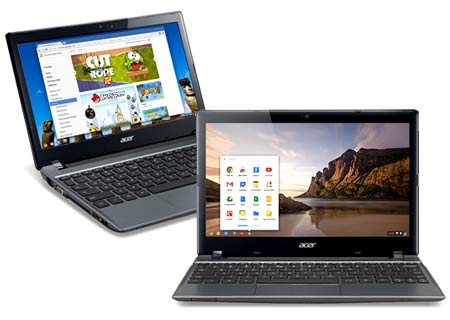