Acer Aspire S7-392 price disclosed for US as sales commence

The Acer Aspire S7-392 Ultrabook which we first glanced at during the Computex 2013 has reached the US with an official price. The notebook was unveiled along with the S3 series from Acer which is yet to make its debut in the country. Also, they’re refreshed versions of the laptops which were launched back in October of last year, carrying the latest Haswell processors from Intel and revised price tags.

The Acer S7-392 is currently available in 2 configurations. The only difference between the two models is related to the CPU. One can be paired with a fourth generation Core i5 4200U chip clocked at 1.6GHz, while the other comes with a Core i7 processor which has a base frequency of 1.8GHz. Since there’s no discrete GPU onboard, both laptops will run on integrated HD Graphics (4400 for the i5 version). 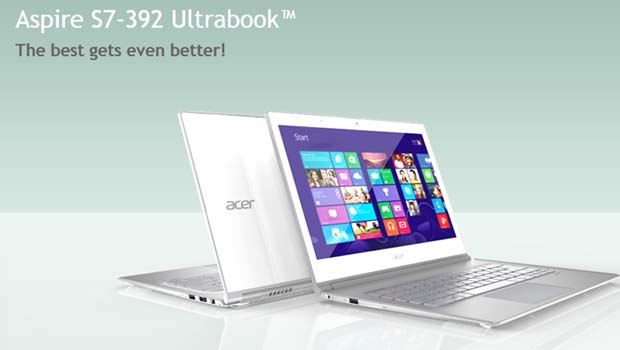 The Acer S7-392 Aspire is being deployed with a 13.3-inch full HD IPS widescreen LED-backlit display that also proffers 10-finger touch input, and an HD webcam for video calling. On the lower half, buyers will find a light-sensing backlit keyboard and a ZoomPerfect touchpad. Beneath them rest a RAID 0 256GB SSD, 8GB of DDR3 RAM and a 4-cell 6280mAh battery that can deliver approximately 7 hours of activity.