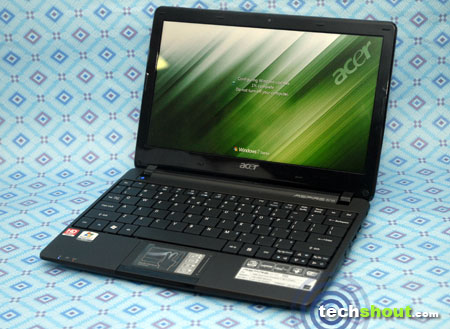 Our time spent with the Acer Aspire One AO722-C58KK netbook which we received for a review early this month taught us affordability and improved features can go hand in hand after all. Besides, it seemed to meet our quintessential notion of the netbook looking cute as we toted it around comfortably too. But there’s obviously got to be more to a netbook than dapper looks and an improved display that Acer’s been rubbing on with this device. The netbook was only very recently released, with its incorporation of the AMD processor pretty much holding every tech enthusiasts attention. Read on.

Unboxing the netbook revealed a user manual along with a couple of other documentation and the MiniGo adapter. Just so you should know the latter is designed to allow direct connectivity to a power supply while being 40 % lighter than standard adapters. And useful it was. Acer’s worked at keeping the Aspire AO722 at a mere 1” in thickness as it weighs down a scale at approximately 1. 46kg. We really found no reason to complain on this front, with the netbook truly adding more meaning to netbook portability among other things. 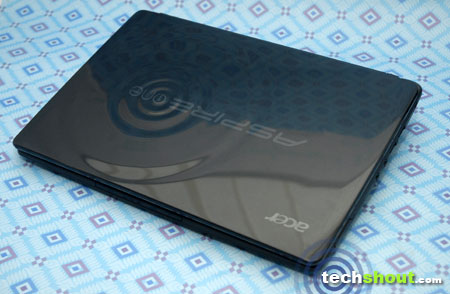 Dressed in a glossy black chassis that appeared to be pretty conventional, it wasn’t until we had a closer look that we noticed the distinct ripple effect. And it’s exclusively available with Acer which does make it all the more likeable! Clearly the highlight of the netbook’s design, the words Aspire One are etched in the background of this effect as ‘acer’ finds space along the upper edge of the lid. The enclosure we also noticed has a slightly shiny effect, more like stars lighting up in the dark sky, adding to the elegant look of the device. The rounded edges add the much needed finishing touch to its profile.

With the screen held firmly to the base of the Acer Aspire One AO722-C58KK by solid hinges, we could push the lid right down to give it an almost ‘keyboard attached to a flat screen’ look. Connectivity options are plentiful with the power port on the left accommodating the Ethernet, VGA, USB and HDMI ports next to it. There’s a tiny area for ventilation in the region between the VGA and USB ports on this side. Move to the right and there’s a 5-in-1 memory card reader, headphone-in and mic-in along with two more USB ports. The Kensington lock slot is last in line here. We didn’t have the netbook strolling by itself on our desk courtesy of the rubber feet on its base finished off in matte. 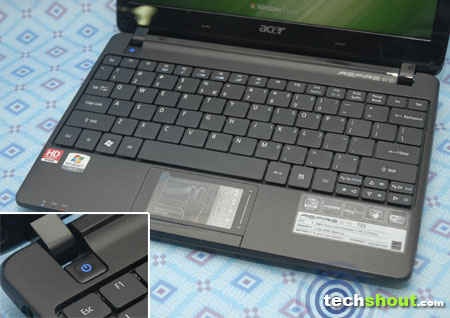 Open the netbook and you’ll see that it’s just a slight improvement in comparison to a 10.1” device. The device’s screen size reads at 11.6” and it’s a CineCrystal LED-backlit TFT LCD one showing off a resolution of 1366 x 768 pixels. While the display doesn’t offer wide viewing angles horizontally and is a wee bit too reflective, it’s still quite comfortable. Most importantly, we had videos and images play up minus any stutter and the ATI Radeon HD 6250 Graphics with upto 256MB inbuilt graphics memory deserves a pat on the back. The AO722’s front profile reveals the base to have a slightly raised yet roundish construct with the speakers being accommodated right under here.

We aren’t complaining but for a full keyboard, the one on this netbook is pretty much of a downer. We appeared to be hitting the ‘t’ and ‘y’ keys inaccurately on more occasions than we would have liked to. There’s no denying that given the netbook’s diminutive profile, the Acer FineTip keyboard doesn’t struggle for space between the keys. In fact it can stand on par with quite a few 13” and 14” notebooks. But there’s clearly something called tactility missing and we’re waging on not too many netbook users nodding their heads in to this bit. Let’s say our precision at hitting the keys, which mind you responded rather well, was around 60%-65%. While we thought it just needed some getting used to – even 3 days of continuous usage really did no good. As for the touchpad, it incorporates multi-touch gesture support and is pretty smooth. The Snyaptics TouchPad v7.2 on PS/2 port software plays things up for it, providing a truckload customization options. 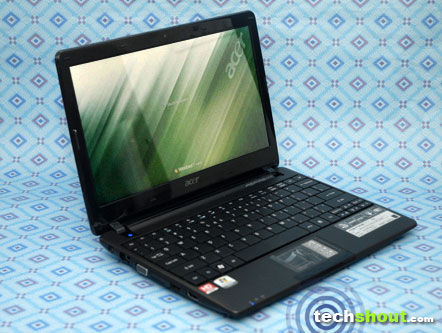 A boot up time of about a minute, we figured isn’t really bad at all and Acer’s hit the sweet spot with the AMD Brazos C50 Processor with APU technology too. The Windows 7 Starter Edition 32-bit OS pulls things together while a 2GB DDR3 RAM also finds space in this tiny tot. Thinking of the specifications in practical terms, limit your usage to watching videos, movies, surfing the internet and other such basic computing needs and the netbook shows off a stellar performance. The company’s pushing the device primarily as a complete internet device for on-the-go users and it does carry the tag pretty well. We didn’t see the need to really run CPU-intensive applications because it hasn’t been tailored for the same. No really if you are going to compare it to a full blown notebook, it will appear to be a slouch. 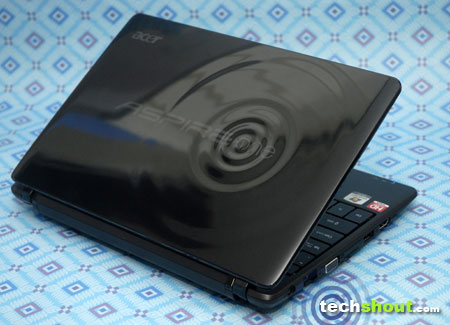 A 320GB HDD should suffice media storage needs while the twin stereo speakers at its base did a good job with the audio being belted out. And, while the sound quality was a little too tinny for our liking, it was definitely passable. What about the 1.3MP Acer Crystal Eye webcam? What about it really, there’s nothing to it! It coughs up images decently and shows off a very sluggish interface. At some point of video recording, the camera was so stubborn at recording actions right at the moment; we decided to time the difference between action and its capture through the webcam. The lag time averaged at around 20s, leaving a sour taste as far as clicking images and capturing videos is concerned. Surprisingly enough though, it made a good comeback when used for web chatting and did seem well designed for the purpose. The Acer Aspire One 722 lasted about 61/2 hours upon medium usage.

Acer is also planning to upgrade the AO722 with an upcoming model that will be horseworked by an AMD C-60 processor and the Windows 7 Home Basic OS. The company also intends throwing in a 500GB HDD as an added perk. And while the unit we received was dressed in a shade of diamond black, the coming months will see the netbook released in blue and red color options too.

With easy connectivity and usability, the AO722 is a great internet device for novice users.

The keyboard is responsive and comfortable for continuous usage.

Web camera is just above average for web-chatting and a laggard otherwise.

Besides the cool ripple effect on the top lid, nothing about the build quality of this device managed to impress us.

For a netbook that is priced at Rs. 19499 (inclusive of taxes) with a one-year International Travelers Warranty, the Acer Aspire One AO722-C58KK did make an impression, at least at being one of the only sub-20k 11.6” notebooks to be available with an OS. Besides like all Acer notebooks and netbooks, it’s being bundled with a Tata Photon+ connection for an extra Rs. 750. The latter allows 2 months of unlimited data download. Minus any frills and fancies, Acer seems to know very well what it was getting into when it built this cute netbook. Fashioned purely for mobile enthusiasts who are looking at upgrading to a netbook for a little more than basic needs, primarily a complete internet device when on the move, this does make for a good choice. The netbook is available now and we’re marking it a good 8.5 out of 10.