Along with the new tablets, Acer also took the wraps off two AIO PCs which run on Android. Dubbed TA272 HUL and DA223 HQL, both devices are designed for entertainment and have already started shipping to various locations across the globe.

The TA272 HUL and DA223 HQL will join the company’s DA241HL AIO PC which was launched back in September of 2013 with Nvidia’s Tegra 3 processor and a 24-inch FHD screen. The TA272 HUL also incorporates a quad core Nvidia Tegra CPU, but there’s no mention of which version of the chip will be included. The latest Tegra 4 is a more likely option considering that the company has fitted this rig with a WQHD display. 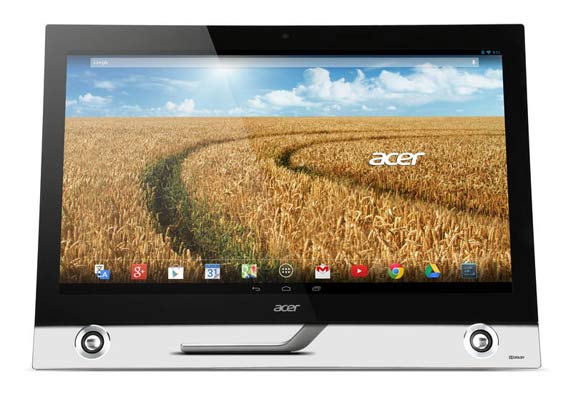 The screen spans 27 inches wide and it offers 10-point touch input as well as wide-viewing angles. The Android 4.2 Jelly Bean platform runs the show here and there’s 16GB of internal storage. You also get dual-band 802.11 a/b/g/n Wi-Fi, dual front-facing Dolby surround sound speakers, USB 3.0 and a 2MP webcam. Apart from these, the AIO comes with HDMI and DisplayPort which allow you to project Windows-based devices onto the 27-inch display.

The DA223 HQL on the other hand is being touted as a portable AIO. It comes with a built-in battery and a 21.5-inch full HD edge-to-edge glass display that offers 10-point capacitive touch input. Along with Android, the device features a quad core 1.7GHz Qualcomm Snapdragon 600 processor. There’s also MHL connectivity which permits the screen to be used as a monitor for other devices.