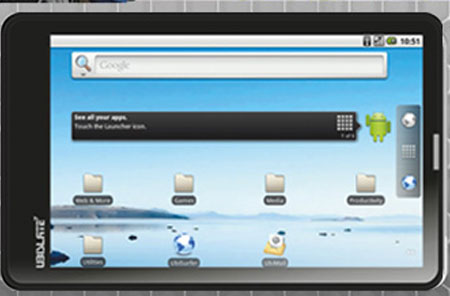 In spite of the fact that DataWind has been unable to cope up with demands of the previous editions of the Aakash tablet, the company has decided to introduce the Aakash UbiSlate 7C in India. The 7C is next in line after the Aakash tab and UbiSlate 7+, or Aakash 2, all of which are designed for students and carry affordable price tags.

The company is currently shipping the previously released tablet to those who’ve pre-booked the device. And with the launch of the 7C, DataWind is giving its customers an option to upgrade to the latest version, if they are yet to receive their slates. Additionally, the price of the UbiSlate 7+ has also been increased. But those who already paid for it will not have to shell out the additional amount.

“As you will see in the chart above, we will also soon start deliveries of the UbiSlate 7C model. This is a multi-touch capacitive screen unit. At an MRP of only Rs. 4,299, it is a fraction of the cost of any other capactivie screen tablet computer in the market, and yet also offers smartphone functionality. Don’t worry, even if you’ve ordered and pre-paid for the UbiSlate 7+ model, you will be sent an Email and given an opportunity to upgrade to the UbiSlate 7C model prior to delivery,” stated Suneet Singh Tuli, President & CEO, DataWind. 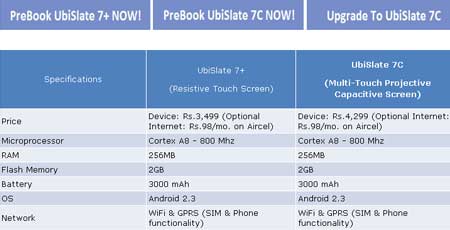 In terms of specifications, the Aakash UbiSlate 7C sure shows improvements as it features a 7-inch capacitive touchscreen as opposed to a resistive display flaunted by its predecessors. But the internal hardware is pretty much the same. It runs an 800MHz Cortex A8 processor and binges on the Gingerbread platform. This slab comes with 2GB flash memory, 256MB RAM and draws power from a 300mAh battery. Besides Wi-Fi, it also extends support to GPRS and can offer SIM and phone functionality too.

The Aakash UbiSlate 7C price is tagged at Rs. 4,299 and it can now be pre-booked through the official website. Users can also subscribe for optional internet through Aircel for Rs. 98 per month.