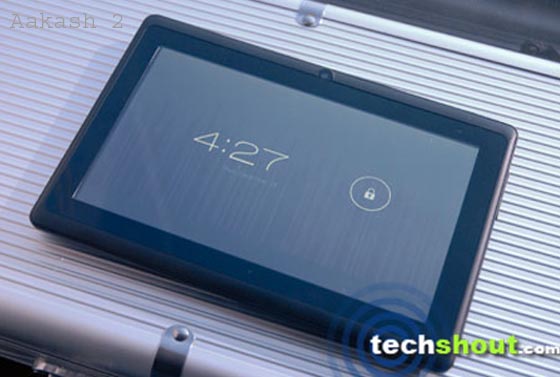 Going by the Aakash 4 specs that were revealed just recently, it looks like the Indian Government has ambitious plans for the next generation tablet, never mind that the previous ones were plagued by production delays, poor customer support and what not. Compared to the Aakash and its second version (there was no third variant), this upcoming iteration will show some noticeably better specifications.

The highlight of the features of the Aakash 4 is its OS that will use Android Jelly Bean 4.2.1 and Ubuntu, the latter of which will be bootable via an external SD card. The front panel will have a 7-inch LCD multi-touch screen of the capacitive type and delivering visuals at a resolution of at least 800 x 480p. Perched above this will be a 0.3MP camera. Since there’s nothing about a rear snapper, we’re most probably not going to see one on the tablet.

The device will be powered by 1GB DDR3 SDRAM, while the onboard memory will read at 4GB. There will be an option to expand the hoarding capacity up to 32GB with an in-built microSD card slot. We’re looking at Wi-Fi 802.11 b/g/n, Bluetooth v2.1 or higher and 2G, 3G or 4G dongle support too. Although the exact battery type that will be embedded within the Aakash 4 hasn’t been specified, it’s likely to render 3 hours of 720p video playback, with the speaker and Wi-Fi turned on.

The Aakash 4 is expected to tip the scales at less than 500 grams and sport dimensions of 7.5 x 5 x 0.7 inches. The Ministry of Human Resource Development as well as the Department of Electronics and Information Technology currently have the aforementioned information up on their websites for interested stakeholders’ consideration. So not all of the given details may stick when it comes to the final product.

It’s far too early to be expecting a price for the Aakash 4, but it’s likely that the commercial version will retail below Rs 6,000 given the idea of a tablet for the masses fueling its concept. Also, students may have to pay less than Rs 2,000 for it if the previous discounted pricing is anything to go by. Meanwhile, here’s a look at our review of the outgoing version.