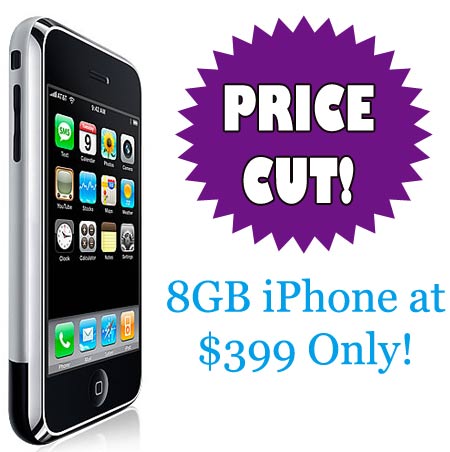 Yesterday, Apple unveiled its new and updated iPod family along with the iPhone-isque iPod Touch. As predicted, this certainly was a “special” event as Apple had some huge news which concerns its revolutionary iPhone.

Apple has officially slashed the price of its 8GB iPhone down to $399 (Approx.16,300). Ever since its launch, this version was available for a hefty price of $599, which means that this unique phone has had its price cut by $200.

According to Steve Jobs, Apple’s CEO, “The surveys are in and iPhone customer satisfaction scores are higher than we’ve ever seen for any Apple product.”

Besides, Apple also announced that it is on track to sell its one millionth iPhone before September end.

This could possibly have been a good enough reason for Apple to lower the price of its iPhone within less than three months of its launch.

“We’ve clearly got a breakthrough product and we want to make it affordable for even more customers as we enter this holiday season,” Jobs added.

The 8 GB iPhone is immediately available for a price of $399 in the US.

Regarding the 4GB iPhone model, there is news that Apple plans to phase it out. There is no news as of now however, regarding a price cut for this version. The 4Gb iPhone will be available in the market till stocks last.