8-inch Samsung Galaxy Note to be unveiled at MWC: Exec 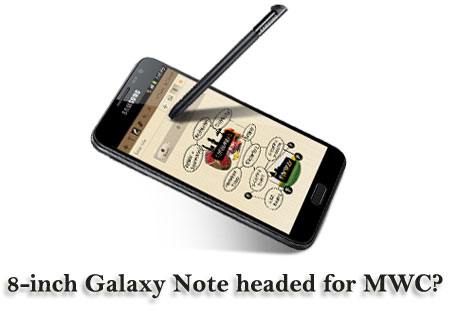 An 8-inch Samsung Galaxy Note model is apparently being prepped for an unveiling at this year’s upcoming MWC in Barcelona. This is not a regular piece of gossip in that it comes straight from the horse’s mouth, JK Shin, Samsung’s head of mobile communications.

About the validity of the 8-inch Galaxy Note, Shin spoke to Korean news outlet iNews 24 and it seems he has ‘confirmed’ to the portal that the device will be seen at the event in Spain. There’s more in the report, but it deals with the S4 among other things.

We are starting to see an increasing number of leaks and unofficial let-outs as we approach one of the biggest mobile events of the year, and we were faced with a similar situation in the build up to the CES earlier in the year. In fact, towards the end of December 2012, it was speculated that a 7-inch version of the same device was in the works.

But even with the South Korean multinational company’s reputation for packing up mobile and tablet segments with a burgeoning lineup of gadgets, that rumor had to be taken with more than just a pinch of salt. And the 2013 CES came and went, but nothing official was heard.

This little piece of news was enough to set the wheels in motion and as TechCrunch is reporting, even though there’s no official confirmation of the tablet’s internals, speculation has started to fly out. The web site says that the new device might come with Android Jelly Bean (version 4.2) as the operating platform.

If everything pans out, it could even get 2GB of RAM, although there’s not much information about the internal storage capacity. More importantly, there isn’t any word on so much as the sort of processor which will feature in the slab. But we could see the device packed up with a 5MP rear camera and a 1.3MP front-facing webcam.

Talk of a 7-inch device can be probably looked on as an attempt to respond to Apple’s iPad mini. But in that respect, an 8-inch Samsung Galaxy Note tablet seems more likely. It’s closer to the 7.9 inches that the iPad mini brings, and if it turns out to have stylus functionality, it could even best the Apple gadget. It’s no wonder the Cupertino-based company is re-thinking its yearly launch strategy.